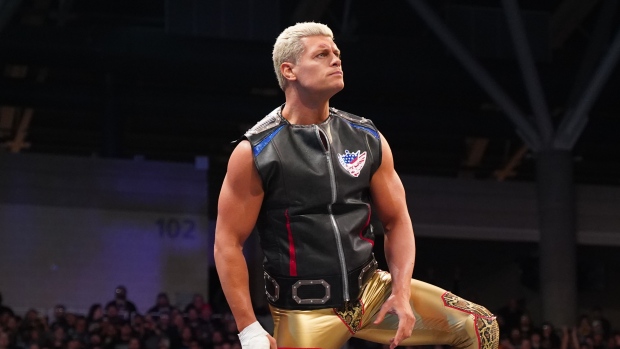 Members of The Elite will put their respective titles on the line on an all-new AEW Dynamite when inaugural TNT Champion Cody makes his first title defence against Jungle Boy and Kenny Omega and "Hangman" Adam Page put their AEW Tag Team Championship on the line against The Superbad Squad of Kip Sabian and Jimmy Havoc.

You can catch an all-new AEW Dynamite at 8pm et/5pm pt on TSN2, the TSN app, streaming on TSN Direct and on TSN.ca.

Cody claimed the TNT Championship in a hard-fought match with the "Murderhawk Monster" Lance Archer at Double or Nothing and announced on last week's Dynamite that he intends to defend his title on each and every Wednesday night. Jungle Boy earned the opportunity for a title match by winning a battle royal last Wednesday, eliminating Orange Cassidy to become the last man standing. Will this be the first in a long line of title defences for Cody or will Jack Perry take the TNT Championship back to the Jurassic Express?

On last Wednesday's Dynamite, Sabian and Havoc defeated former champions SoCal Uncensored (Frankie Kazarian and Scorpio Sky) to get their shot at Omega and Page. Since winning the titles from SCU in January, Omega and Page have taken on all comers and are undefeated in 2020. Can Sabian and Havoc become the first team to solve Omega and Page or will The Elite stand tall once again? A date with Best Friends (Chuck Taylor and Trent?) beckons at Fyter Fest.

Elsewhere, "Le Champion" Chris Jericho is in action, fresh off the wild brawl on last week's Dynamite when Mike Tyson and his crew interrupted the Inner Circle's pep rally. Jericho will likely have "Iron" Mike on his mind when he takes on Colt Cabana, who's been the object of The Dark Order's recruitment campaign in recent weeks.

We will also hear from FTR for the first time when Cash Wheeler and Dax Harwood sit down with Tony Schiavone. The accomplished tag team crashed last week's Dynamite to save The Young Bucks from a beatdown at the hands of The Butcher and The Blade, but promptly turned their backs on the Jacksons when they offered FTR their hands. Perhaps the duo will explain their actions and why they came to AEW.

After nearly three months since we last saw her in action, Big Swole makes her Dynamite return on Wednesday night. Her opponent will be none other than former Women's World Champion "The Native Beast" Nyla Rose in her first match since losing her title to Hikaru Shida at Double or Nothing. There is no love lost between these two women with Rose victorious over Swole in their first meeting in January.

The man set to challenge for Jon Moxley's AEW World Championship at Fyter Fest is also set for in-ring action on Wednesday night as fans will get another look at "The Machine" Brian Cage. Cage showed exactly what he was capable of in winning the Casino Ladder Match at Double or Nothing to earn a title shot and his adviser Taz made it clear on last week's Dynamite that Cage is gunning for Mox.