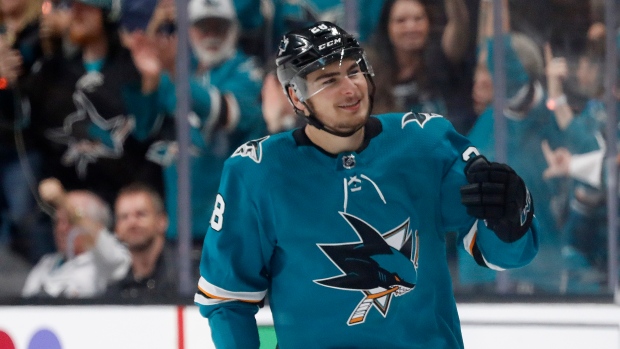 SAN JOSE, Calif. — Turn up your TSN Radio and it won’t take long for the conversation to eventually shift to the best class of restricted free agents in NHL history.

Without fail, though, San Jose Sharks forward Timo Meier somehow rarely gets mentioned in the same class or caliber. If it’s possible to be a secret as a 30-goal scorer, Meier is the Forgotten RFA of 2019.

Maybe it’s because of the West Coast “bubble” Joe Thornton insists the Sharks live in.

“Everyone is just learning about him,” Logan Couture said.

Meier snapped the rest of the hockey world to attention on Saturday night, sidestepping Jay Bouwmeester like he was standing still before pulling the Peter Forsberg ™ on Jordan Binnington.

My, oh, Meier it was beautiful.

Meier scored twice as the Sharks doubled up the St. Louis Blues, 6-3, to kick off the Western Conference Final at SAP Center. Game 2 is Monday night back at the Shark Tank.

Sharks GM Doug Wilson has to be both cheering and dreading Meier’s playoff explosion - because the cash register is ringing. Cha-ching. Meier now has 12 points in his last 11 playoff contests after his second three-point night of the spring.

“It’s fun to play at this time of the year,” Meier said, smiling.

If Marner, Point and Rantanen are a cut above in this year’s class, Meier is right there with Aho, Tkachuk, Connor, Laine and Brock Boeser.

The first thing you notice when you talk to Meier is that he’s thick - and not in a beefy way. He’s listed at 6-foot and 210 pounds, but he is built like a brick bleephouse.

“He’s a bull,” linemate Couture said. “When he skates, with his strength, he’s tough to defend. Good stick. Strong on pucks. You saw the talent on the one where he was able to walk around and finish. He’s a really good player and he’s come into his own.”

It hasn’t been a straight line to this point for Meier, starring on the big stage for the Sharks’ top line. Not even close. More like a rollercoaster.

The Sharks missed the playoffs once in the last 15 years and Meier was their reward at No. 9 overall in 2015. He was taken one pick ahead of Rantanen.

Now 22, Meier was sent back to the QMJHL, where he played for Halifax and then was traded to Rouyn-Noranda. His first pro season began in the AHL, then he earned a call-up to the Sharks, and went back to the AHL for the Calder Cup playoffs.

There was buzz that Meier might be a bust. The Sharks took the patient approach.

Meier was in major junior when the Sharks and Blues squared off in the West Final in 2016. But now starring on a line with the playoffs’ leading scorer in Couture and deadline acquisition Gus Nyquist, maybe Meier is the shot in the arm the Sharks need to finally land that elusive Stanley Cup.

“Doug Wilson and [assistant GM] Tim Burke handled him perfectly,” coach Pete DeBoer said. “They sent him back to junior, started him in the minors, and when he stumbled, we put him back down again. I think he’s right on track.”

“There’s been some tough times for him,” Couture said. “When he came up, he wanted to score right away and I think that’s natural when you’re a scorer in junior and you’re a high pick. I felt the same pressure when I was trying to break into the NHL. It didn’t come right away.”

“I think power forwards take longer,” DeBoer said. “He throws his body around. I think those guys take a little longer to have success at the NHL level, to learn how to use that physicality and still have that skill.”

What has developed has been incredible over the last two full NHL seasons. He’s leaped 30 points consecutively in each of the last two years. Even this season, there was room for improvement. He collected 30 goals and 36 assists but went 17 straight games, almost a quarter of the season, without a goal.

“It’s a learning process, and not just this season,” Meier said. “Sometimes you’ve got to fight harder to score goals and keep going.”

Now, as the Sharks deliberate whether to keep Erik Karlsson this summer, and how to dole out dollars to captain-turned-San Jose folk hero Joe Pavelski along with playoff puzzle piece Kevin Labanc, they will have to figure out the answer to this SAT pattern question for Meier: