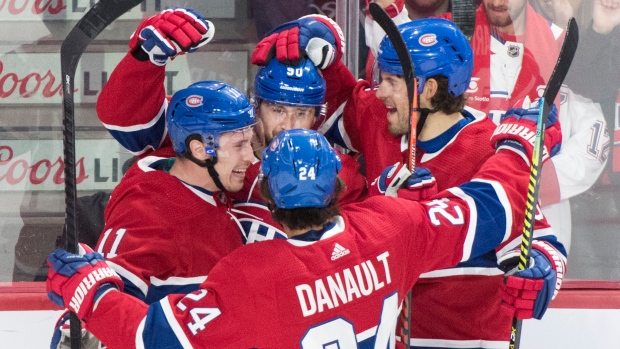 Let’s dive right into another edition of the Friday Five, where we’re serving up some quirks, quips and questions from around the NHL this week:

1. There’s the Habs, then the Hab-Nots

Here’s a not-so-bold claim: The Montreal Canadiens have the most balanced attack in the league. The Habs have scored the fourth-most goals (57) in the NHL – as many as the Maple Leafs, despite playing one fewer game – yet they don’t have a single scorer in the Top 50. Brendan Gallagher and Jonathan Drouin are tied for the team lead and are 58th.

According to TSN Research, the last team to finish in the top five without a scorer in the Top 50 was the New York Islanders in 2003-04. They scored the fifth-most goals (237) but their two leading scorers, Oleg Kvasha and Trent Hunter, each had 51 points, tied for 73rd in the league.

Montreal is on pace to have six 20-goal scorers and they already have 15 players with multiple goals this season.

They’re more or less the opposite of the Edmonton Oilers, who have just six scorers with two or more goals. Leon Draisaitl and Connor McDavid have combined for 21 goals, while the rest of the Oilers’ lineup has combined for just 26.

When is it time to worry about Sergei Bobrovsky? We’re barely seven weeks into a seven-year, $70 million contract, but Bob is off to a shaky start with the Florida Panthers. His save percentage is in the seventies, as in an unsightly .878. His even-strength save percentage is down to .850.

But it’s still too early to sound the alarm on the two-time Vezina winner. He’s streaky. Last year, he had a 20-game run from mid-November to mid-January with an .893 save percentage. He bounced back and was the best goalie in the NHL from March into the playoffs.

It seems unlikely. Steve Downie is the last NHLer to break the 200-minute mark in a season, racking up 238 for the Pittsburgh Penguins in 2014-15.

It seems like a couple players want to take a run at those marks. League leader Nikita Zadorov (37 PIM in 15 games) of the Avalanche is on pace for 202 minutes. Islanders’ bruiser Ross Johnston, who leads the league with six fighting majors, has 33 minutes in just eight games.

Meanwhile, the Avalanche might have a leading Lady Byng candidate on their blueline: rookie defenceman Cale Makar has the most points of any player (15) without a penalty minute.

Lady Byng candidates, they are not.

What a brutal stretch for the Colorado Avalanche. After an 8-1-1 start, the Avs dropped five in a row (0-4-1) before Thursday’s win over Nashville, where they set a franchise record with six goals in an eight-minute span.

To add insult to injury, coach Jared Bednar became the first to be hit with a double-minor penalty for two unsuccessful coaches challenges in the same game on Tuesday night.

Turns out, Bednar apparently didn’t know that the stakes would be upped for a second incorrect challenge under the new rule, as cameras captured him asking assistant coach Ray Bennett: “Why is that four minutes?”

Colorado coach said why is it 4 minutes 😂😂 pic.twitter.com/YZ0wk00WnT

In case you’re wondering, we checked with the NHL: the penalty doesn’t continue to increase for a third unsuccessful challenge. It’s just another double-minor penalty. It would be amazing theatre though if an additional two minutes were tacked on, or it was doubled to eight minutes.

Two other coaches have challenged twice in the same game this season, after previously being limited to one challenge per game. Detroit’s Jeff Blashill flirted with the four-minute penalty, but overturned a goal on the second challenge on Nov. 2. Chicago’s Jeremy Colliton went 2-for-2 on both challenges against the Flyers on Oct. 24.

Read an incredible stat and verified it: The New York Islanders are a 48-2-3 under coach Barry Trotz when scoring three or more goals in a game. They’ve been lights out, able to lock it down like almost no one else. Well, until the Penguins erased a three-goal deficit in the third period on Thursday night.

Still, after a 10-game winning streak with an Islanders team that seemingly everyone overlooked – yet again – to make the Stanley Cup playoffs, is it too early to be talking about Trotz for another Jack Adams Award?

No one has won back-to-back Jacks since Jacques Demers in 1987 and 1988 with the Detroit Red Wings. Perhaps more impressively, Trotz could be just the second three-time winner of coach of the year, joining Pat Burns, and making three in the last five years.

I don’t have a vote for the Jack Adams, but here is what my way-too-early ballot would look like (in order) if the season ended today: