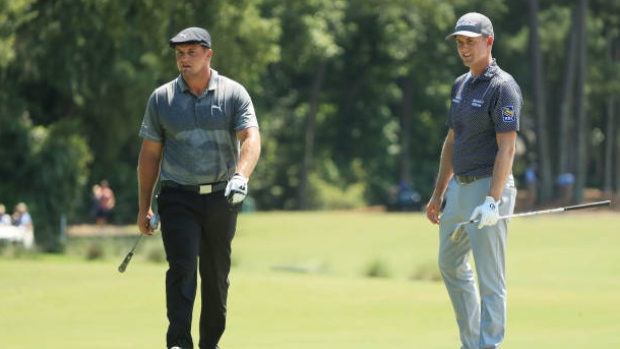 They are arguably the two hottest golfers in the game, two players who’ve been fixtures at the top of the leaderboard since the PGA Tour restarted play.

Yet the styles of play of Webb Simpson and Bryson DeChambeau couldn’t be more different. As they head into the weekend at the Rocket Mortgage Classic, they find themselves separated by just a shot at the top of the leaderboard.

In the three and a half tournaments since the tour returned to action, Simpson has a missed cut and a win, the latter coming at the RBC Heritage. He leads the FedEx Cup standings and sits sixth on the Official World Golf Ranking. He also has the lowest scoring average on the PGA Tour at 68.662.

A win or runner-up finish this week would make Simpson the top-ranked American golfer.

His game has been a model of consistency for some time, mind you. The missed cut at the Charles Schwab Challenge was just his second in his last 38 starts.

Last week, he skipped the Travelers Championship after his daughter tested positive for COVID-19, a test that Simpson said later showed to be a false positive. Still, the week at home was a good rest and allowed him to keep his well-tuned swing in shape.

"Coming off Hilton Head feeling like everything in the golf swing was simplified, I felt like there was not a whole lot to work on or improve upon, so it was more just kind of like maintenance work," he said.

"I’ve tried to become more well-rounded through the bag and I’m seeing results. I’m having fun out there."

DeChambeau has finished tied for third, tied for eighth and tied for sixth in three tournaments so far. He’s had a legitimate chance to win all of them. His play puts him 12th on the FedEx Cup points list and 10th in the world ranking. He has the third-best scoring average on tour with a mark of 68.822.

Despite the great numbers and results, DeChambeau is far from satisfied with his bulked-up body and how it’s translated into his overall game

"Playing the golf that I want to play, if I was to give myself a grade, and I know people are going to say things about this and people are going to chirp and chime in on what they think, 'oh, he's playing unbelievable golf,' I'd really say it's B game right now," stated DeChambeau. "It's not 100 per cent, but it's not bad, either. I'm still able to get it in, I'm able to score, which is great, but I still have to refine some things."

One of those is his wedge play, which lags behind the rest of his game. He sits 104th in Strokes Gained: Around the Green and is 194th in Scrambling from outside 30 yards.

But the big difference in the games of the two players comes at the start and finish of every hole.

DeChambeau and his newfound muscle feature a game built to overpower the golf course, while Simpson’s relies on accuracy and touch.

This week, DeChambeau sits unsurprisingly in top spot in Driving Distance with his longest whallop travelling 377 yards. Simpson is at the opposite end of that statistic, sitting in 89th spot with an average of 293.6.

But in accuracy off the tee, the numbers flip around. Simpson is tied for fourth while DeChambeau is well back in a tie for 93rd. Simpson also has a healthy lead in hitting greens, reaching 32 of 36 so far. DeChambeau has only found 27.

It proves once again that in golf, it doesn’t matter how you do it, just how many strokes it takes to get it done.