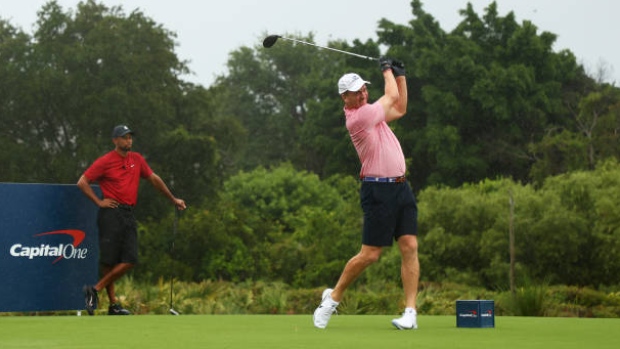 The Match: Champions for Charity produced plenty of good shots and not all of them were made with golf clubs.

Tiger Woods, Phil Mickelson, Peyton Manning and Tom Brady put on an entertaining and sometimes hilarious exhibition for COVID-19 relief. It was a mix of great shots, awful ones and a lot in between. When it ended, Woods and Manning combined for a 1-up win but no one really cared about the golf as much as the laughs and memorable moments that were generated. This was more about having fun at a time when the world can use a few smiles.

The four golfers wore microphones, which allowed viewers to listen in and enjoy the back-and-forth, as well as earpieces, that let them interact with the commentators, which included outspoken former NBA star Charles Barkley.

Manning got things going quickly, asking Brady on the first tee if he wanted to use New England Patriots coach Bill Belichick, with whom he has a reportedly rocky relationship, as a caddie.

Woods also mocked Brady, who struggled with his game most of the day, telling the Tampa Bay Buccaneers quarterback his errant drive on the third hole had found the fairway but on the seventh hole.

And after a series of errant shots, Barkley taunted Brady about his struggles, and then promptly watched him hole a nine-iron from the fairway for a birdie.

But Barkley may have had the last laugh as the quarterback promptly ripped the seat of his pants when he bent over to get the ball from the cup.

On it went hole after hole, with other athletes such as Brooks Koepka, Russell Wilson and Alex Rodriguez making appearances on the broadcast to add to the fundraising efforts.

It was, in many ways, exactly what we need right about now. It was live sports but it wasn’t about winning or losing. It was about entertaining and enjoying. It was about two of golf’s greatest playing with two NFL quarterbacks thrust into different roles. And it worked to perfection, despite the driving rain that soaked them all.

The enjoyment factor was a huge improvement over the initial Woods-Mickelson match held back in November 2018 in Las Vegas. That one featured just the two golf professionals playing for $9 million. It lacked good golf and had few notable interactions between the two players. Adding the two quarterbacks to the mix made for lots more interaction with team strategy and assistance being played out over the microphones. With plenty of donations coming in from corporations and individuals, $20 million was raised.

The event was also the return to play for Woods, who last played Feb. 16 at the Genesis Invitational when he admitted to having back issues. This time out he looked smooth and pain-free, and was clearly the best of the four golfers, hitting every fairway in regulation.

The next date on golf’s calendar comes June 11 with the return of a regulation PGA Tour event, the Charles Schwab Challenge. It won’t be as much fun as this outing, but it will also show how golf may be an elixir at a time of need.