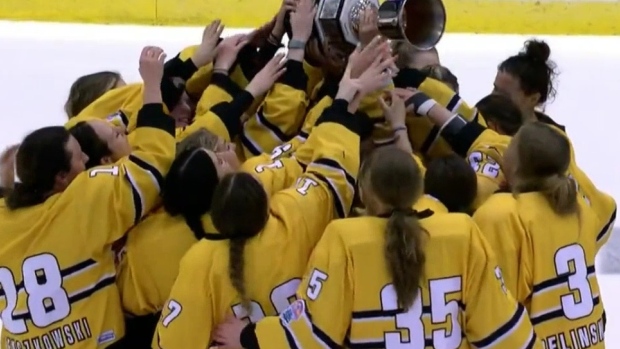 The Pride claimed their third championship and became the PHF’s first team to defend its title after beating the Minnesota Whitecaps a year ago. Boston also defeated the Buffalo Beauts to win the 2016 championship in the then-National Women’s Hockey League’s first season.

Boston captain Jillian Dempsey, a member of the Pride since their inaugural season, had a goal and assist, and Jenna Rheault sealed the victory by scoring into an empty net with 90 seconds remaining. Katie Burt made 26 saves for the Pride, who squandered a 1-0 lead and rallied from a 2-1 deficit.

Amanda Conway and Taylor Girard scored for the Whale, who were making their first final appearance in their seven-year history. Abbie Ives stopped 24 shots.

Playing their third game in four days, the Pride scored three times on four shots in the third period.

Wenczkowski scored the go-ahead goal 6:57 into the period when she drove up the left wing and was in position to tap in a rebound after Ives stopped Christina Putigna’s shot from a bad angle to the right of the net.

The goal was similar to Raselli’s, which she scored seconds earlier. This time it was Mary Parker’s shot from the right circle getting stopped by Ives, with the puck bouncing to Raselli, who tapped it into the open left side.

Boston clamped down on defense, limiting the Whale to one shot on goal over the final 20 minutes.

It was a disappointing end for Connecticut (15-3-2), which won its first regular-season title and led the PHF in goals scored (74) and fewest goals allowed (44).