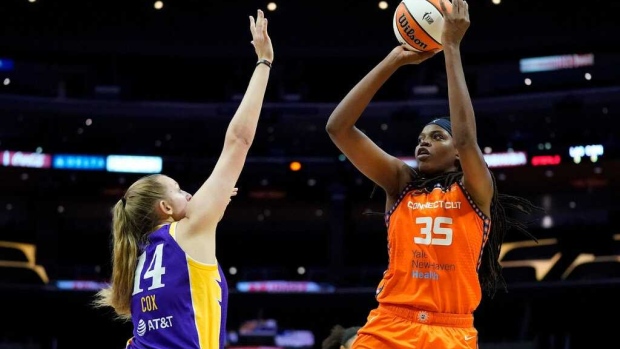 The WNBA playoffs are set to kick off this Thursday, September 23rd.

With some of the leagues best talent going head to head and some storylines to watch out for, here's one reason to root for each team in the 2021 WNBA Playoffs:

The Connecticut Sun: Jonquel Jones! Maybe the best player in the WNBA this season, and an MVP frontrunner for sure. Going into the playoffs on a 14-game winning streak, the Sun have all of the momentum.

The Las Vegas Aces: Their revenge tour. A'ja Wilson was last year's MVP, but the Aces fell just short of a championship after losing in the WNBA Finals. You know they’re coming back strong.

The Minnesota Lynx: Sylvia Fowles! Already a future Hall of Famer, Fowles is in the MVP conversation for this season at the age of 35. She’s turning back the clock this season. Also… our Canadians, Natalie Achonwa and Bridget Carleton!

2X Champion and 2X Finals MVP 🏆@SylviaFowles has been dominating the game on both sides of the floor year in and year out#W25 pic.twitter.com/somKh3nE0N

The Seattle Storm: Their dynasty. After winning it all last season, they have the chance to win their third title in four years. Sue Bird is about to turn 41, and she still can’t stop winning.

If you think Bird is the #WNBA GOAT, vote for her now at https://t.co/ZKYeejmkB7, the WNBA App, or use the hashtag #WNBAGoatVote with her name! pic.twitter.com/P5QaFnBDzy

The Phoenix Mercury: DIANA TAURASI. How about another title for one of women’s basketball’s GOATs? Also... KIA NURSE. We can always root for a Kia Nurse team.

The Chicago Sky: Candace Parker’s homecoming. It’s been so easy to root for Chicago this season with one of the city’s most iconic basketball players back in town playing for the home team.

The Dallas Wings: A sneaky fun young team. Arike Ogunbowale, Satou Sabally, and Marina Mabrey are all exciting young studs, and that’s not to mention the fact that with Charli Collier and Awak Kuier, this team is only going to get better.

The New York Liberty: Sabrina Ionescu! In her first healthy WNBA season, Ionescu and the Liberty are in the playoffs, with vets including Betnjiah Laney and Natasha Howard joining the team this season. They’re on the way up.