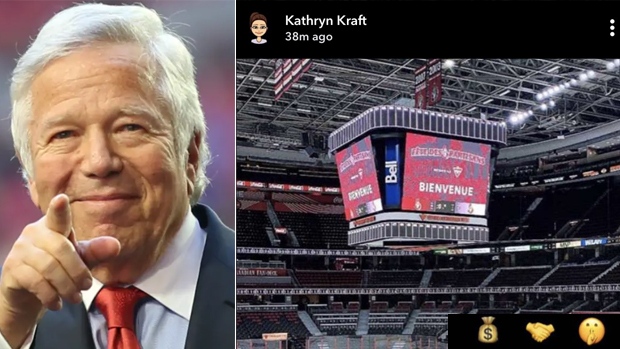 Sliding into somebody’s DMs has a certain connotation in the social media realm, but sometimes it’s the only way for a reporter to contact a potential source for a story.

So I decided to shoot a direct message to @SensDiehardz after a tweet from the account went viral, causing Senators fans to briefly fantasize about the possibility of New England Patriots owner Robert Kraft having an interest in purchasing the NHL team in Ottawa.

The picture in question was an interior shot of Canadian Tire Centre, showing the ice surface. To the bottom right there were three suggestive emojis – a money bag, a handshake and a shush face. The post from a purported member of the Kraft family seemed to indicate a significant financial transaction was on the horizon.

Within a couple of hours, the tweet had completely consumed the Senators’ fan base on social media.

Fans were desperately trying to decode the message, questioning the validity of the post. Why on earth would Robert Kraft have any interest in purchasing the Senators? But the consensus seemed to be that the post was too random to not have some grain of truth to it.

In the end, the story turned out to be false; Robert Kraft does not have a granddaughter named Kathryn and the story only had shelf life of a few hours.

But what was the story behind that post? Was it photoshopped by somebody to create a buzz? And why did @SensDiehardz believe that it came from Robert Kraft’s granddaughter?

I reached out to the person who runs the @SensDiehardz account via direct message and asked if they would participate in a phone interview to give their version of how the events unfolded.

“I would love to talk about this over the phone, because there’s so much more to it,” they wrote back on Twitter’s private messaging function. “I didn’t make this up. I would never do that because I know what this franchise means to the people of Ottawa.”

They agreed to the phone interview on one simple condition: That I would protect their identity.

“The last thing I need, is to become Ottawa’s own Steve Bartman.”

So the first thing the person who runs the @SensDiehardz account wants to make clear, is that they weren’t out for fame or notoriety by posting this picture to Twitter.

“If I really wanted the attention, I would have put it on my real account with my name on it,” they said over the phone, pointing out the @SensDiehardz account was set up many years ago, when they were still in school.

The person who runs the @SensDiehardz account was out having coffee with friends last weekend when they stumbled upon the image from inside Canadian Tire Centre from Kathryn Kraft.

For years, their group of friends had followed Kathryn Kraft on Snapchat – often in awe of the pictures she was posting. There was a picture of her wearing five of Tom Brady’s Super Bowl rings on her fingers. Videos with her and Rob Gronkowski. Once she posted a picture of herself and Robert Kraft tagged with the caption “Granddaughter and grandfather time.”

So when they saw the picture from inside Canadian Tire Centre, they had to do a double take. For years, they had followed this account, for the inside pictures and stories around the New England Patriots. Now she was posting about their favourite hockey team?

“We’ve always just known her as Robert Kraft’s granddaughter. That’s the way she’s always presented herself on Snapchat. And that’s definitely how my circle of friends has known her,” @SensDiehardz said. “So I honestly thought it was real.”

Despite being certain about the identity of the poster, @SensDiehardz admits they were also simultaneously skeptical, because the odds of Robert Kraft being interested in purchasing the Senators seemed too far-fetched.

“He probably doesn’t even know where Ottawa is, so for sure this can’t be true. It’s too good to be true, right? But again, why would you post that?” @SensDiehardz asked. “And why is she in Ottawa? And why is she posting these?”

So @SensDiehardz decided to take a screengrab of Kathryn Kraft’s Snapchat story and post it to a wider audience on Twitter, in the hopes that somebody else could weigh in on the validity of the picture.

“I legit thought this team was being sold,” @SensDiehardz said, hoping that members of the media tagged in the tweet could put the final pieces of this puzzle together.

I came to notice this tweet because I was tagged in the original post and my notifications were suddenly going wild — which was atypical for a Saturday afternoon.

What followed was a frenetic several hours that put Senators fans on a wild roller-coaster ride. The rumour mill was churning at full tilt with speculation about what the cryptic picture could mean for the future of the hockey club.

The tweet had more than 1,000 interactions and created such a buzz that I lead off my TSN 1200 radio coverage for the Sens game that evening by asking TSN Hockey Insider Bob McKenzie about the wild rumour.

McKenzie had connected with his sources in the NHL, who were completely taken aback by such a strange rumour making the rounds. But by the end of the evening, media outlets across North America ­– including the Sporting News, Fox Sports, Yahoo and the New York Post ­– all had stories documenting a wild theory that Robert Kraft was eying the Senators.

TSN hockey insider Bob McKenzie joins the Sens pregame show to talk Sens vs Rangers, rumours that New England Patriots owner Robert Kraft might be interested in buying the Senators, and how some RFAs are gambling on themselves.

“I couldn’t wrap my head around how viral this went. I knew it could go viral, but I didn’t think it would be this big of a story,” @SensDiehardz said. “Now I know what it’s like to be a celebrity with a phone that’s blowing up.”

Many people are wondering why @SensDiehardz didn’t reach out directly to Kathryn Kraft via Snapchat to confirm the validity of the story. If they had a personal connection on social media, it would seem like an easy step to take. That actually did happen, but the conversation was one-sided and didn’t lead anywhere.

“I snapped her back and said, ‘Please buy the Sens,’” @SensDiehardz said.

The person behind the Kathryn Kraft Snapchat account definitely saw the message, as the app confirmed that she read the note. But not only did Kraft decline to respond, she went one step further, blocking @SensDiehardz’s ability to message her through Snapchat in the future. So that route proved to be a dead end.

According to @SensDiehardz, Kathryn Kraft then deleted that infamous snap a few hours later – and that appeared to be her only post that emanated from Ottawa. There were no other posts related to the city or the Senators.

After their tweet went viral, @SensDiehardz decided to open up their direct messaging options on Twitter – just in case somebody with more information wanted to contact them.

They did receive a direct message from somebody affiliated with the Senators organization in the wee hours of Sunday morning, at around 1 a.m. @SensDiehardz characterized the message “as extremely polite and professional,” but the Senators official wanted to share their feelings that the tweet was factually incorrect.

Dreger: No shred of truth to the latest rumour I've chased about a potential sale of the Sens

“They just wanted to let me know that Robert Kraft didn’t have a granddaughter named Kathryn,” @SensDiehardz said.

Still, @SensDiehardz’s circle of friends is adamant that the person who posted that picture is directly tied to Robert Kraft in some fashion. They even sent along a previous video from Snapchat, where the user named Kathryn Kraft is standing right next to the Patriots’ owner. And since Kathryn Kraft posted many videos from inside TD Garden during the Bruins’ lengthy playoff run last spring, they’re fairly certain she lives in the Boston area.

“I’m 99 per cent sure that it’s still somebody connected to Robert Kraft,” @SensDiehardz said. “There’s just way too many private pictures and videos she’s had over the years for it to be an outsider. It could just be a different relative.”

Perhaps that cryptic post from Kathryn Kraft was merely an indicator of a smaller transaction on the horizon – such as a future rink advertisement or a minor sponsorship affiliation. But it certainly resonated with a portion of the Ottawa fan base that would like to see a change in ownership.

The person behind @SensDiehardz counts themselves as someone who would like to see a regime change in Ottawa, but stops well short of saying they hold any sort of hostility towards current owner Eugene Melnyk.

“I don’t like using the word hate. He’s had a troubled past few years, especially with his health, so I wouldn’t say I hate him. That’s not right. Do I want Eugene to sell? Of course I do. Do I hate the man? Of course I don’t,” @SensDiehardz said.

After the tweet was debunked, @SensDiehardz says they took a significant amount of backlash from Senators fans who accused them of creating false hope. They were called all sorts of derogatory names and accused of making up a false story to create a rise out of Sens fans.

“I wouldn’t waste my precious time. I have more things to do in my life than to be doing stuff like this,” @SensDiehardz said.

As our interview concluded, I asked them one last, simple question: If you could do it all over again, would you have posted that picture to Twitter – knowing how it all turned out?

“Probably not – I wouldn’t want to get anybody’s hopes up, so I would say no, I probably wouldn’t have posted it,” @SensDiehardz said.