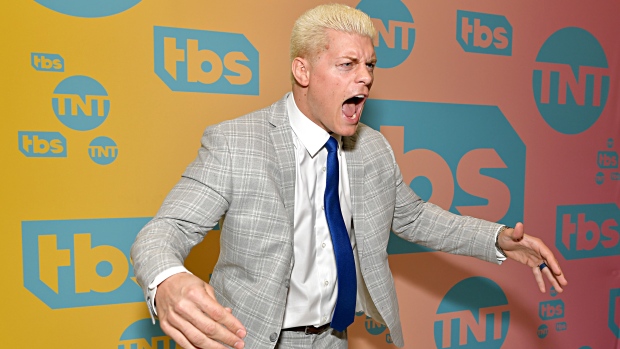 On Wednesday night, In a promo that is still being talked about days later, Cody Rhodes, who is both the executive vice-president of All Elite Wrestling as well as the man that will challenge Chris Jericho for the World title at Saturday’s Full Gear pay-per-view, announced that if he isn’t able to defeat the champion, he will never wrestle for the AEW gold again.

Cody held a conference call on Friday ahead of Saturday’s event where he referenced promoters of the past including his father Dusty Rhodes, and says that his statement resonated because of the truth in both his words and his on-screen persona.

“It is sometimes a curse to not be able to hide under a mask or be a character and there are times that it’s a blessing,” said Cody.  “Right now it’s been a blessing, I’m not hiding from who I am, I’m not hiding from my position here.  What I said about not challenging for the AEW World Championship ever again if I don’t beat Chris (Jericho) is very authentic.”

“There is no logic device or hole in that statement.  That’s something I have heard from fans and that controversy has surrounded people like my Dad, Bill Watts, Verne Gagne and I refuse to have that controversy during my run.  We have enough young and hungry men and women that I want to help showcase and, at the same time, I’m in the best run of my career, so that “if” I’m not so worried about.”

The promotion currently has three championship belts, all of which would be considered top titles and the inaugural title holder is still in possession of each belt.  Cody has interest in adding an intermediary title to the AEW fold and hints that it could happen sooner rather than later, but bristles at the idea of it being seen as lesser than any of the belts currently in circulation, which he wants to all be viewed at the same level.

“I get frustrated when I hear the term mid-card, I know that it exists and I’m someone that toiled in the mid-card myself, but as a talent you never consider anything that you do mid-card,” said Cody.  “I didn’t consider my run with the Intercontinental Championship (in WWE) to be mid-card, I wanted it to be the best thing, I wanted it to rise above.”

“We’ve got to make sure the women’s championship and Rhio is respected at the same level as Chris Jericho as the World Champion and then Frankie Kazarian and Scorpio Sky, seeing them this morning making the media rounds in Baltimore with the (Tag Team) titles.  It’s not willy nilly handing these belts out, handing these prizes out, they matter and the next one will matter just as much.”

In challenging for the belt on Saturday, Cody knows the importance of the moment, but doesn’t think it needs any over the top promotion, instead willing to let the stakes of the evening speak for themselves.

“I don’t just take my own pressure into these matches, there is a great deal of pressure that has been put on us by the fan base, the lapsed fan, the returner, these fans that are back and want what we said not to be campaign promises, they want what we said to be real and so far it has been,” said Cody.

“I don’t think it’s too much weight, that’s the pressure I want and that I’ve prepared for.  I’ve had a lifetime to prepare for a 60-minute match.  It’s the biggest match of my career for the most important title and, like I said, the truth doesn’t need weight.”