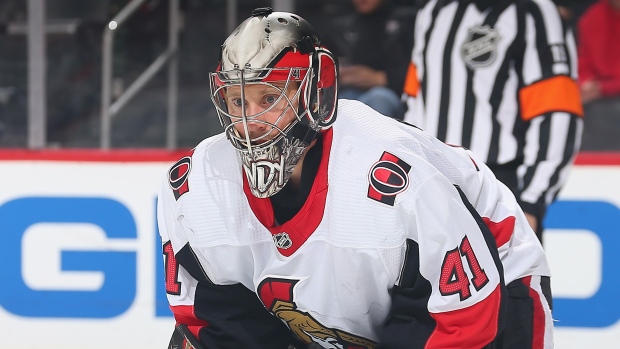 There was a time when Craig Anderson being relegated to the backup role for three consecutive games would have provided endless hours of talk-radio fodder and splashy tabloid headlines in this market.

Over his almost decade-long tenure in Ottawa, Anderson has faced stiff competition from the likes of Robin Lehner, Ben Bishop, Andrew Hammond, Mike Condon and Anders Nilsson – all of whom tried to wrestle the No. 1 goalie mantle away from him. At times, the tension inside the Ottawa crease was palpable, but Anderson never truly relinquished his status as the top netminder.

But when Senators coach D.J. Smith told reporters on Monday morning that Marcus Hogberg would be making his third straight start against Chicago, hardly anyone in the press conference room inside Canadian Tire Centre raised an eyebrow.

As we read the tea leaves, it appears as though the Craig Anderson era is officially winding down in Ottawa as the club starts to transition to a goaltending future that no longer includes the 38-year-old veteran.

“Part of it is we want to see these young guys play,” Smith explained at one point on Monday, trying to defuse what could be an explosive situation of seeing a long-term No. 1 goalie demoted to the role of backup.

The context of the rebuild in Ottawa has bought the head coach a significant amount of leeway, which allows Smith to reduce the roles of veteran players without the usual controversy that comes attached.

Rather than stoke the flames of a goaltending controversy in Ottawa with sharp and abrasive quotes about his diminished role, Anderson is taking the news in stride. His calm and mellow approach to riding the bench is a window into Anderson’s understated personality.

“All I can do is control my attitude and the way that I approach the game,” an upbeat Anderson told reporters on Monday. “And that’s being ready at any time. My job in practice is to battle hard for the guys. When called upon I have to make sure that I’m at my best and make sure I’m ready to earn my ice time. Everything you get in this game is earned.”

Lately, the rookie Hogberg has been the one earning the blue paint ahead of Anderson. Smith surprised some by going against conventional wisdom and starting Hogberg on Saturday night – after the rookie played in Detroit 24 hours earlier. But Hogberg responded with another solid effort, stopping 23 of 25 shots to earn a point against Montreal.

That performance on Saturday has earned Hogberg another start against Chicago on Tuesday night.

“For me, I’m going to put the guy in the net that gives us the best chance to win,” Smith said. “That’s changed throughout the year – at times it’s been [Nilsson] and at times it’s been [Anderson]. Right now, we’re riding [Hogberg]. The guy who’s playing the best is the guy who gets to go in and play.”

Anderson has been around this game long enough to know that even though Hogberg has wrestled away the No. 1 job right now, things can often change in a moment’s notice. An injury or poor play could put Anderson right back in the starter’s net for a long stretch. Nilsson remains out with a concussion and there is no guarantee he will return to the Ottawa net before the end of January.

“If you earn your ice time, you’ll play. If you don’t earn it, you’ll sit and try and earn it back,” Anderson said. “It’s no different being a first-year guy or a 15- or 16-year guy. There are no games here that are given to you. If you can’t do it they’ll find someone else who will.”

While it seems like a foregone conclusion Anderson will be dealt by general manager Pierre Dorion at some point before the Feb. 24 trade deadline, the veteran netminder is always prepared for any scenario to play out.

“You never know. This game is funny and it’s a funny business,” he said. “You can’t plan things out because usually when you make plans, they change.”

The idea the Senators need to showcase Anderson is slightly erroneous – considering most teams have a very good idea of what the veteran goaltender with more than 600 games of experience would bring to the table.

Anderson has allowed 18 goals on his last 121 shots faced for a paltry .851 save percentage in his past four starts. But Smith says his recent struggles are probably a direct result of the Senators missing some key players on the blueline – forcing them to play some very inexperienced defencemen.

“I don’t know if his role has changed. He’ll get his chance again. He’s still a good goalie in the NHL,” said Smith. “You don’t ever count anybody out. They want to keep playing right to the very end and he’s got a lot more hockey in him.”