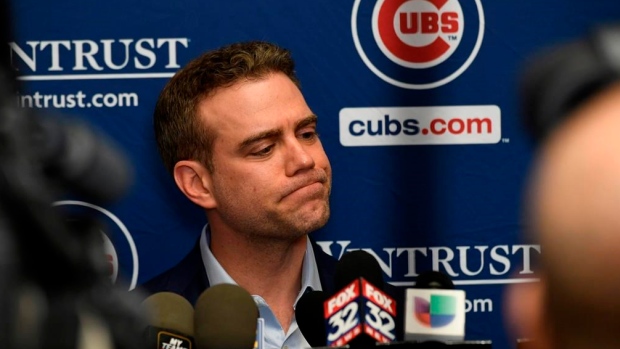 The Chicago Cubs announced on Tuesday that Theo Epstein will step down from his role as club president at the end of the week.

The architect of the club's 2016 World Series victory, Epstein joined the club in 2011 after a decade with the Boston Red Sox.

Theo Epstein will step down from his role as President of Baseball Operations effective Nov. 20 and depart the organization after nine seasons.

Jed Hoyer, who joined the club in Nov. 2011 as Executive VP/General Manager, will be named President of Baseball Operations. pic.twitter.com/SDeF826SFH

Jed Hoyer, the club's general manager, will assume the role of club president as of Nov. 20.

“Theo and I have been communicating about this possible move for a couple of years, and we have been working together toward a transition that makes sense for the Cubs and for him,” said Cubs chairman Tom Ricketts said in a statement. “The timing is right for a number of reasons, and most importantly we are both thrilled that Jed is the person succeeding Theo. We have had our most successful period in over a century under Theo’s leadership, and we are grateful for everything he has given to this organization and this city. Jed has been a big part of that success, too, and offers a combination of continuity and a fresh perspective that will serve us well as we look forward to another period of sustained success.”

According to multiple reports, Epstein did not resign to join another club and intends to take the next year off and step away from baseball.

“I am grateful to everyone with the Cubs: to the Ricketts family for this opportunity as well as for their loyalty; to the fans for their support and the depth of their emotional connection with the team; and to the players, coaches, staff and my front office colleagues for their friendship, excellence and dedication to helping us accomplish our initial goals of regular October baseball and a World Championship," Epstein said in a statement.

Under Epstein, the club ended its 108-year World Series drought and have enjoyed a period of sustained success. Since 2015, the Cubs' 505 regular-season victories are second in the majors behind only the Los Angeles Dodgers (528).