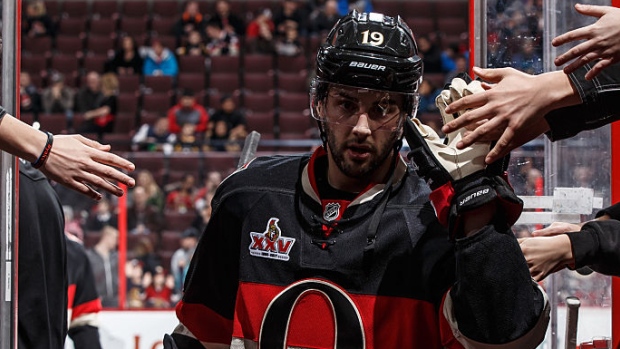 It was hard to ignore the pictures being shared on social media on Thursday night.

Everywhere you turned, people were posting images of large pockets of empty seats inside Canadian Tire Centre. If this was a regular-season game in October against the Arizona Coyotes, you might possibly wrap your head around the lack of ticket sales.

But 2,000 empty seats for a second-round playoff matchup against an Original Six opponent? That almost seems sacrilegious in Canada.

This feels especially true when you contrast the scene in Ottawa on Thursday night with the situation involving the other Canadian team still alive in the playoffs. In Edmonton, fans are paying $85 for something called a “Concourse Pass” at Rogers Place - which allows you nothing but access to the arena and offers no view of the ice surface.

For roughly the same price, Ottawa fans turned down the opportunity that would have given them an actual seat inside the venue.

The Oilers also sold out a viewing party inside their arena for a road playoff game in 30 minutes. The Senators could not sell out a home playoff game with about 72 hours’ notice.

While they’ve caught playoff fever in Edmonton, it appears as though the fans in Ottawa are suffering through a condition known as Senators malaise.

But there is an important distinction to be made between the two markets. With Edmonton, fans are enjoying a Stanley Cup playoff experience for the first time in 11 years. Mix in a new, state-of-the-art arena and the most exciting player in the NHL and you have a recipe for a scalper’s dream.

In our nation’s capital, the Senators have been one of the most consistent teams over the past two decades, qualifying for the playoffs 16 times in the last 20 seasons. At no point has Ottawa missed the playoffs in consecutive years during that span, meaning the Senators’ longest playoff drought lasted exactly one season.

It’s a situation reminiscent of the Atlanta Braves, who strung together an impressive run of 14 straight playoff appearances starting in 1991. But in the latter half of that streak, empty seats for playoff games at Turner Field became commonplace. A divisional playoff game against the San Francisco Giants in 2002 had 8,000 empty seats - which was fairly noticeable in a 50,000-seat venue.

The Braves - who did win one World Series - were often pegged as playoff underachievers during their extended run of consistency. The Senators were often painted with the same brush, as they were probably the best team to never win a Stanley Cup in the first decade of this run. Now, they’re caught in an awkward place where they consistently qualify for the playoffs, but have rarely been a Stanley Cup threat in the past decade.

TSN Hockey insider Darren Dreger joins Naylor & Landsberg to discuss what the Maple Leafs could get for Kasperi Kapanen, the Senators poor attendance in Game 1 of their second round series against the Rangers and more.

One could surmise that the Detroit Red Wings didn’t suffer from similar playoff fatigue with their fan base during a 24-year postseason run that just ended, because they won four Stanley Cups during that window.

Still, the ticketing issue has been a problem in Ottawa all season long. We got our first warning of trouble on the horizon when the home opener against the Toronto Maple Leafs failed to sell out in October. A couple of weeks later, only 11,061 bothered to show up against the Arizona Coyotes in a game you could have sworn was being played in Glendale. In the first half of the season, there were another half-dozen nights in which the Senators played in front of at least 4,000 empty seats in their home arena.

There were several theories floating around for the decreased attendance. They ranged from the problems of the Phoenix pay system (in which thousands of federal government employees have been underpaid or not paid at all) - to the age-old argument about Canadian Tire Centre’s location outside the city in Kanata.

Some blamed ownership, claiming the club was unwilling to pour the necessary resources into the building a championship-calibre team. Many fans simply lamented the general direction of the organization, feeling like they were simply toiling somewhere between average and mediocre.

If that last point was truly the issue, then the 2016-17 season should have converted many skeptics back into paying customers. While Guy Boucher’s style of play may not be the most entertaining, he’s created a system that put the Senators into a position to succeed in the playoffs. The club also features one of the most dynamic players in the game in Erik Karlsson, who’s often worth the price of admission on his own.

And yet, even with a club that’s built to win in the playoffs and features a generational talent, they can’t sell out the building in the second round.

So there must be a deeper issue at play.

The arena location certainly plays a factor in this mix, as it should be noted that the teams that consistently face attendance issues in the NHL – Arizona, Carolina, Florida and (gulp) now Ottawa – all have suburban arenas. This should be remedied with a downtown arena project. But until there’s a shovel in the ground at LeBreton Flats, there is always the fear that government red tape will foil the plan.

The Senators have played in their suburban location for the past 20 years, so it almost feels like a disingenuous argument to state this could be the cause for their current attendance woes. The truth of the matter is that Ottawa simply doesn’t have a big enough season ticket base. Though the club never publicly discloses how many season tickets they have sold, it stands to reason that the number is well under 10,000. That means on a nightly basis, the Senators have to drum up enough walk-up sales to fill at least half their building – which is located well outside of the downtown core.

The magic number for Ottawa should be to get to 12,000 season tickets, but it’s certainly a challenge for a market that does not have the corporate support that other Canadian cities enjoy. The region’s biggest employer – the federal government – is unable to purchase season tickets for its employees nor can they be involved in any sponsorship opportunities. It’s a major hurdle for the club and one of the factors for the attendance woes in this market. Even when Ottawa had one of the most exciting and competitive teams in the NHL in the mid-2000s, they still had the lowest season ticket base of any Canadian franchise.

But if you’ve lived in this city, you know all of these arguments. You know it’s not just one single factor for why it’s a challenge for the Senators to sell out their home arena. If you talk to 10 different Senators fans, they will give you 10 different reasons why they don’t attend games on a consistent basis.

If this was merely a price point issue, that would be an easy fix. That’s what keeps some fans away, but not all of them.

The situation in Ottawa is a strange marriage of complacency and anger that’s hard to describe unless you live in this market. It’s a deep-rooted and complex situation that does not have a simple solution. The downtown arena will help with one part of the issue, but it won’t solve everything that ails this franchise.  It certainly won’t erase the obstacle preventing the federal government from buying season tickets, so there will still be challenges ahead.

The organization should share in some of the blame, as they’ve had some missteps along the way. People are still harbouring anger for the way the Daniel Alfredsson situation played out, even though that was four years ago. The Senators are not a cap team and there’s a segment of the fan base who believe this franchise will never spend the necessary resources to become a legitimate contender.

But at the same time, the Senators have iced a competitive team and delivered on most - if not all - of their preseason promises. The fans should shoulder the responsibility too - for failing to support a winning product at the most important time of the year. How can you criticize ownership for not spending more money on payroll, while simultaneously skipping out on home playoff games?

We’ve always heard that winning is the best form of marketing in the world of sports, but the 2016-17 Ottawa Senators are certainly putting that theory to the test.