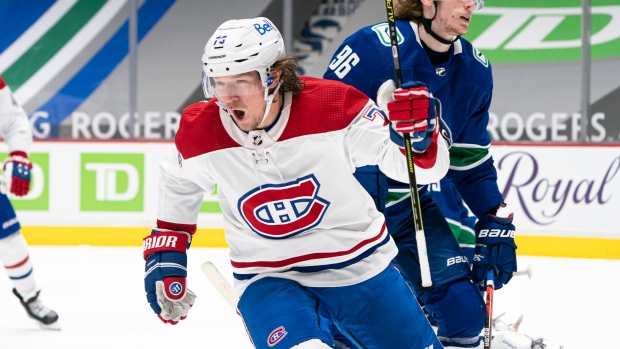 In six games since leaving the Vancouver Canucks, Toffoli has fit in seamlessly – his eight points (five goals, three assists) put him tied for second in league scoring behind Winnipeg’s Kyle Connor through the Saturday games.

Toffoli signed a four-year, $17-million dollar contract in the off-season to bring scoring flair from the wings, and to say he’s delivered so far for Claude Julien and company would be an understatement.

There is a lot more to like about Toffoli – and really, the start by Montreal as a team in general – than a hot scoring start, one underpinned by shooting 25 per cent over the first five games.

One of the critical building blocks for this Montreal team was to build on last year’s success at even strength, where the Canadiens – despite finishing 24th in the league standings – finished 13th in goal differential.

Most of last year’s success came through the top line, where Phillip Danault, Brendan Gallagher and Tomas Tatar leveraged their high-end agility and relentless forechecking to punish opposing defences. Stylistically, they were a perfect match for Julien, who has long made it a priority to run up gaudy shot volumes in the offensive third.

But replicating that style further down the roster was a challenge without more capable attackers. Thus began the off-season push to bring in more weapons, headlined by Toffoli and Josh Anderson. Intermixed with a bunch of capable young forwards, Montreal bet that their additions would not only come in and create offence, but also make the players around them better.

Bringing this back to the Toffoli addition, one of the early tandems Julien created paired the 28-year-old winger with Jesperi Kotkaniemi, the team’s third-overall pick in the 2018 NHL Draft.

Kotkaniemi had shown plenty of promise in his young career, but went through an offensive slump last season that saw him on the fringes of the regular lineup. Entering year three, I think there was a question as to what Kotkaniemi’s talent ceiling actually was, and whether an improvement in teammate quality would turn his game around.

That has happened in spades. The Toffoli and Kotkaniemi pairing (generally playing with Joel Armia as the third option) has terrorized teams the same way the Montreal top line has for years. In fact, if we look at some of the most effective combinations by net-shot differential this season, Toffoli and Kotkaniemi are near the top of the NHL, and they are certainly at the top of Montreal’s leaderboard: 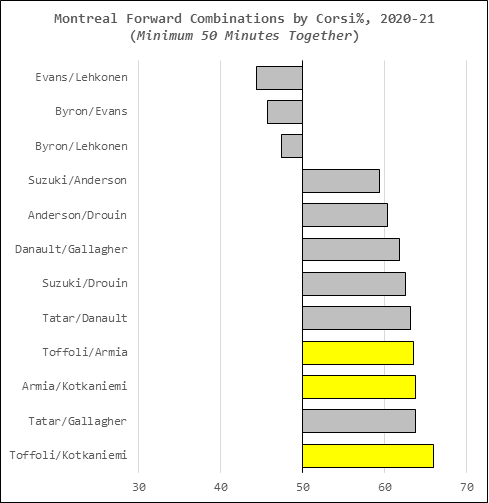 This is the first time in a long time that the first line has been displaced by any sort of underlying statistical measurement, like shot differential (Corsi%) or expected goal percentage. But the key thing is their displacement didn’t happen because of their own struggles – the team’s second and third lines (predominantly) have elevated their game and are taking the game to opponents with a frightening level of consistency.

It’s also worth mentioning that when the majority of your forward tandems are getting better than 50 per cent of the shot share, as is the case in Montreal through the first two weeks of the season, your team is in a really good position to compete long term.

The key test for the Montreal forward groups will not merely be to continue creating territorial advantages like this, because it’s all for naught if those do not translate to goals. So far, so good on that front: the Toffoli and Kotkaniemi combination leads the team with a +5 goal differential when deployed together at even strength. And again, there isn’t a single regular Montreal forward tandem that’s in the red when it comes to goal differential so far this season.

Absent a slow start on the penalty kill, there is plenty to like about what we have seen from Montreal this season.

Finding a singular reason for their apparent jump in the league power rankings is impossible. But the off-season forward acquisitions probably headline the list, and it’s not just about the raw skill brought by players like Toffoli or Anderson. It’s also about their ability to positively impact the play of teammates around them and develop chemistry with the rest of the active roster.

Kotkaniemi has always had the skill. But there is a reason he is off to career starts in individual shot rates, individual scoring chance rates, and, more broadly, rate scoring. He has a dangerous – and apparently lethally complementary – winger in Toffoli.

If this sustains, Montreal will be Toronto’s biggest threat in the North Division. Frankly, that may already be the case.