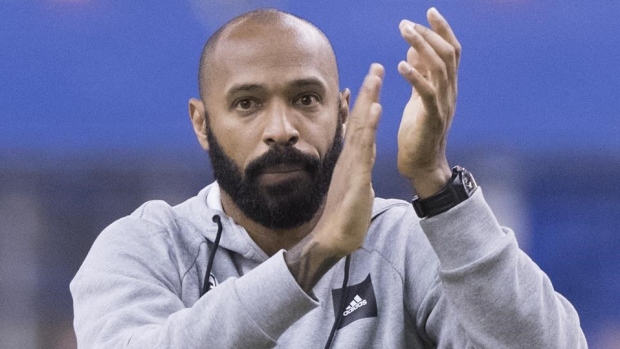 Montreal Impact manager Thierry Henry is counting on his players to be ready when, or if, the 2020 Major League Soccer season returns.

The Frenchman didn't want to speculate on when MLS would resume its 25th anniversary season during a media availability Tuesday afternoon, but he said he and his staff would do everything necessary to prepare his players.

"I'm sure the commissioner and whoever is involved to take that decision are working extremely hard to figure out what we're about to do," Henry said.

However, Henry said it's on the players to remain in top condition and that their fitness will be tested upon their return to the team.

"Trust is very important right now because you're not with the players," he said. "You're only sending information. Are they following the information? You'd like to think so. But it is what it is. You have to trust those guys.

"If you're a champion and you're a competitor, you will come back fit."

Major League Soccer currently has a training moratorium through May 15, which keeps players like Impact midfielder Samuel Piette away from the Centre Nutrilait training facility and forces him to train on his own.

"It's been difficult to keep the motivation high," Piette said. "At the same time, it's the only part of the day that I have to do something obligatory. I kind of enjoy the moment because I go out, run, train, so I'm actually looking forward to this part."

Piette and his girlfriend have retreated to their chalet in the Laurentians region, north of Montreal, as the province continues to be hit hard with COVID-19 cases.

The Canadian international said he speaks with Henry and the rest of the Impact coaching staff around once a week, while following a daily training regimen that sees him do four- or five-kilometre runs, sprints, and body weight exercises.

"It's pretty intense," Piette said. "Obviously we don't have the coaches looking at us. It's basically up to you that has to do it."

Henry joined the Impact as manager back in November 2019. The World Cup winner and long-time Arsenal striker led his team past Deportivo Saprissa in the CONCACAF Champions League Round of 16, then earned a win and a draw in his first two MLS regular season matches before play was first suspended March 12.

Piette said the 2020 MLS season could always play out if action resumes in June or July, seeing them go until December 31. But with the rising rate of COVID-19 in North America, it is difficult to determine if play could resume by then.

"Numbers are still growing here in Quebec, in Montreal, in Canada as well," Piette said. "The U.S., I would say it's pretty much even worse. The curve is not going down."

Henry has remained in Montreal throughout the crisis while trying to keep in touch with his family as often as he can, and he feels that everyone's well-being should be a top priority and not soccer.

"It is a world problem at the minute. We are all one country right now," Henry said. "Wherever you are we're worried about our families, thinking about how everyone is. Making sure we're respecting the rules by staying at home and not passing on that vicious virus."

This report was first published by The Canadian Press on April 28, 2020.