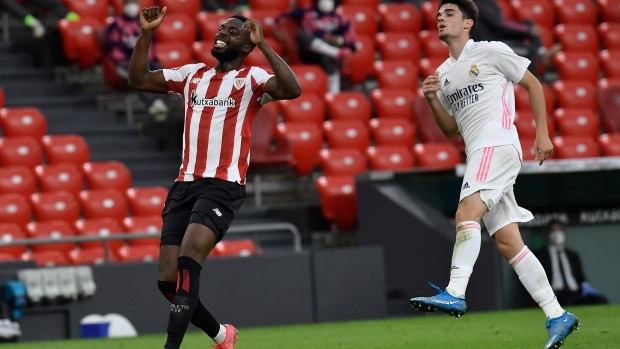 It was a week of big storylines in LaLiga Santander, as Atlético Madrid and FC Barcelona faced off, as a prestigious record was broken in Bilbao, as the latest Spain squad was announced and as the first sacking of the season took place. Here comes a look at all those headlines and more.

Three teams tied at the top

It’s so tight at the top of LaLiga Santander, with Real Madrid, Atlético Madrid and Real Sociedad entering the October international break level on 17 points each. Sevilla FC could have joined them, but their first defeat of the season arrived against Granada CF to leave Julen Lopetegui’s side just behind in fourth on 14 points.

Lemar and Suárez fire Atleti to victory over Barça

The blockbuster match of the weekend took place at the Estadio Wanda Metropolitano on Saturday night, as Atlético Madrid hosted FC Barcelona. The home side triumphed 2-0, with Thomas Lemar firing in the first before Luis Suárez scored against his former club. Until last season, Diego Simeone had never defeated FC Barcelona in LaLiga Santander, but now he has won this fixture twice in a row.

A first point for Getafe CF

Getafe CF have finally put a point on the board, holding Real Sociedad to a 1-1 draw at home to deny the Basque side the chance to go clear at the top of the table. The Azulones had suffered seven defeats from seven matches to start the season, but now have a positive result to build on.

Athletic Club’s Iñaki Williams set an incredible new record on Friday night during his side’s 1-0 victory over D Alavés. By taking part, Williams has now played in 203 consecutive LaLiga Santander matches for the Basque side as the forward has featured in every league game Athletic Club have played since 20th April 2016. That moves him past the previous record of 202, set by Juan Antonio Larrañaga.

A big win for RCD Espanyol

RCD Espanyol celebrated an impressive 2-1 victory over Real Madrid in front of their fans at the RCDE Stadium on Sunday, a win that was their first ever triumph at their new stadium over a team that was leading the LaLiga Santander table. Goals from Raúl de Tomás and Aleix Vidal made this an afternoon to remember for the Pericos.

A poor start to the 2021/22 season has seen Levante UD decide to part ways with coach Paco López. The former Levante UD player and youth team coach took over the senior squad at the end of the 2017/18 campaign and miraculously kept the Granotas up, before achieving 15th, 12th and 14th place finishes over his three full seasons in the job. Until his sacking, only Diego Simeone and Álvaro Cervera had been in their current jobs longer than López out of all the other LaLiga Santander coaches. He’s leaving the job with two amazing records on his shoulders: the coach with most games and most victories for Levante UD in LaLiga history.

Villarreal’s summer signing Arnaut Danjuma is taking LaLiga Santander by storm. The Dutch winger scored both goals in his side’s 2-0 victory over Real Betis in Matchday 8, meaning he now has four goals from his first six appearances in Spain’s top division, in addition to the goal he netted in the Champions League against Atalanta. It seems Villarreal CF have found a special talent.
Vicente Iborra’s first match of 2021
There was further good news for Villarreal CF this week as Vicente Iborra was able to make his comeback from injury. The midfielder hadn’t played since suffering a knee ligament injury in a game against Real Betis on 13th December 2020 and he was able to return against the same opponent this past weekend, coming on as a late substitute.

Luis Enrique has named his Spain squad for the upcoming Nations League Finals and the headline inclusion was that of FC Barcelona’s 17-year-old rising star Gavi. The talented young midfielder has made five LaLiga Santander appearances already for Barça this season and has impressed those watching on, including the head coach of La Roja.

The presentation of the 2021/22 LaLiga Ambassadors