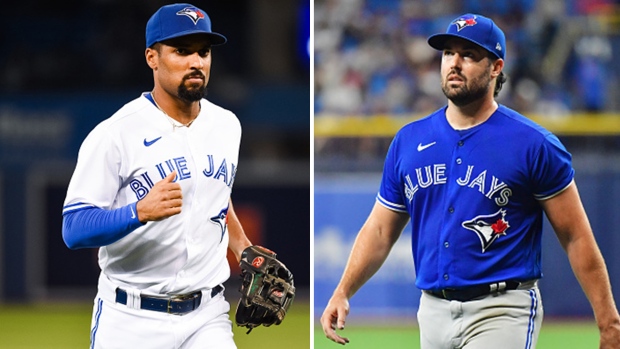 CARLSBAD, Calif. — The Major League Baseball hot stove season is officially underway and this winter promises to be much like last year for the Toronto Blue Jays.

With money to spend, they’ll be attached to every name under the sun and they’ll be one of the busiest clubs out there when it comes to conversations.

Who they end up with in the end is far from certain, however, and there’s a lot of work to be done with a total of 13.3 Wins Above Replacement set to hit the open market in Marcus Semien, Robbie Ray and Steven Matz.

Those three somewhat low-key moves gave GM Ross Atkins and the Jays front office an easy A+ grade in hindsight, and they may have to replicate that sort of haul to exceed the 91 wins that weren’t even enough to get them into the postseason.

Win-now mode has the Jays shopping at every level of the market, but the uncertainty surrounding the CBA expiring on December 1 has many predicting another slow-moving off-season that’s sure to make for some anxious moments for everyone in the game.

After a pandemic-induced pause on the usual in-person nature of things now lifted, here are three storylines to pay attention to as the GM meetings get started this week at the Omni La Costa Resort & Spa just outside San Diego.

Now that Ray and Semien have their qualifying offers from the Jays, what happens next?

It’s a foregone conclusion both will reject the $18.4-million qualifying offer by next Wednesday and hit the open market.

At that point, both the Jays and their respective agents will start to get a better idea of where things stand in terms of a reunion.

Both are expected to attract nine-figure offers, which will have the Jays front office looking into alternatives and trying to figure out how to best spend that type of money.

There’s no doubt the Jays would love to bring Ray and Semien back — Matz, too — but the money and term are going to be significant.

The Jays have to be cognizant of the huge raises coming for players like Vladimir Guerrero Jr., Bo Bichette and Teoscar Hernandez.

The timing of things could come into play, as well.

One year after being one of the first free agents to sign in early November, Ray could be forced to wait for names like Max Scherzer, Clayton Kershaw, Kevin Gausman and Justin Verlander to sign before his market develops, while a deep class of shortstops may produce a domino effect for Semien.

Keeping Ray is believed to be the priority, but the Jays will get a draft pick if either of them signs elsewhere.

What’s the status of CBA negotiations and how is the current lack of a CBA past Dec. 1 going to affect free agency?

The MLB off-season has backed up significantly over the years, with many of the top free agents now (frustratingly) waiting until January to sign in a normal cycle.

With the CBA expiring in about three weeks, this is not a normal cycle and no one is expecting a barrage of early signings as players and agents wait for clarity on some of the financial structures in the sport.

Every year there will be a handful of players who value the certainty of heading into the winter with a contract in hand — Ray last year, Andrew Heaney this year — but most are expecting the pace to be similar to the last couple of years.

“There might be a point where we have to make a decision with a little bit of uncertainty,” Atkins said last month.

The ugly scenario is if a labour dispute ensues and everything hits pause.

During the 1994 strike, transactions weren’t allowed until things were settled.

At this point, the two sides are talking, as reported by The Athletic’s Ken Rosenthal and Evan Drellich, with the players association making their second economic proposal recently.

The two sides were able to get a deal done at the last minute back in 2016, but there’s not a lot of optimism that will happen again given some of the large scale financial issues on the agenda.

What items are on Atkins’ to-do list at the GM meetings this week?

The process of gauging their ability to re-sign their own free agents has been going on for weeks now, so the Jays likely have an internal idea of how realistic the returns of Ray, Semien and Matz are.

Whether or not it’s those exact names returning, there’s currently two rotation holes, a need for at least one impact infielder and a desire to add bullpen depth.

The month of November is used to sift through the alternatives, and that’s what Atkins will start doing in person this week.

The trade market is something to keep an eye on and it could be a way for the Jays to fill a hole or two early in the off-season without having to wait out free agency.

During his tenure, Atkins has been historically very active at the GM meetings, getting Kendrys Morales and Lourdes Gurriel Jr. deals done back in 2016, and attempting to lure Kevin Gausman and Jake Odorizzi, among others, with realistic pitches over the past couple of years.

With the amount of work to get done this winter and the bitter taste left in Mark Shapiro’s mouth after missing out on the post-season, it wouldn’t be surprising to see the Jays at the very least attempting to strike an early salvo.