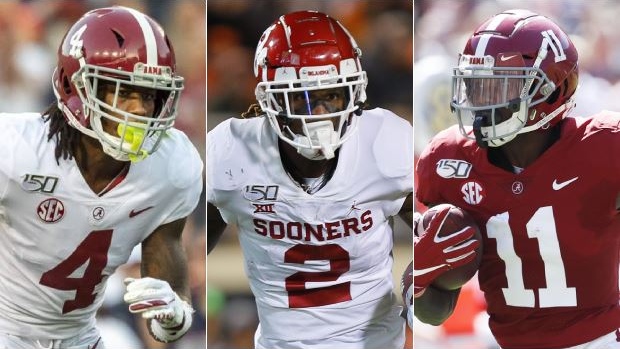 The 2020 NFL Draft is the Year of the Wide Receiver. Last year at this time a lot of talk was about the defensive linemen, with Nick Bosa and Quinnen Williams leading the way. Now it’s the wide receivers’ turn, led by Jerry Jeudy, CeeDee Lamb, and Henry Ruggs III.

While the impact of this year’s draft won’t be known for seasons to come, there is considerable excitement about, and expectations of, the depth and talent of this year’s group of pass catchers.

“You’ve probably heard every GM and coach talk about this wide receiver class; it’s a good one.” New York Jets GM Joe Douglas, to reporters at the NFL Scouting Combine.

"The average over the last five years for wide receivers going in the first three rounds is 12, between 12 and 13 a year. You can easily make an argument, from a grade perspective, that there are 20, 25 of those guys out there this year." Las Vegas Raiders GM Mike Mayock, to reporters at the NFL Scouting Combine.

Douglas, Mayock, and Lynch weren’t the only ones heaping praise on the wide receiver class leading up to the draft, but they’re singled out here because all three could use a talented, young receiver and all three could be in position to land one of the top prospects at the position. An expected run on quarterbacks and offensive tackles could push the top receivers out of the top 10 selections and in sight of the Jets (No. 11), Raiders (No. 12), and 49ers (No. 13).

Douglas opted to let Robby Anderson, his top wide receiver last season, walk in free agency. And the spillover effects of this year’s class of receiver prospects may have affected Anderson’s, and other receivers’, market this off-season.

Only three receivers – Anderson, Randall Cobb, and Emmanuel Sanders – received multi-year deals as free agents. Granted this year was considered a weak free agent class at the position, but compare that to the 13 receivers that received multi-year free agent deals ahead of the 2019 season, and a case could be made that teams are waiting for the draft to fill their needs at the position.

And if they waited through free agency, they might wait through the first round as well. ESPN Draft Analyst Mel Kiper said he believes talented wide receivers will be taken throughout the draft.

“There are going to be some fifth-round receivers out of this group,” Kiper said. “And you’re going to see some really good players drop to points you never thought was possible.”

The year 2004 holds the record for most wide receivers taken in the first round with seven. The talent certainly appears to be there for this year to challenge that number. TSN.ca takes a look at the top receivers in the 2020 NFL Draft class: 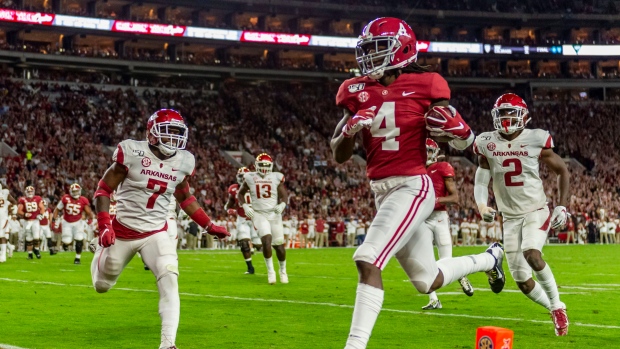 Jerry Jeudy at the NFL Combine

Jeudy has been at or near the top of the wide receiver prospect rankings throughout the entire pre-draft process. Along with teammate Henry Ruggs III, Jeudy will be the next in a line of impressive Crimson Tide alums at the position to be selected in the first round, following Calvin Ridley in 2018, Amari Cooper in 2015, and Julio Jones in 2011. And like those three, now stars in the NFL, he’s expected to enter the league as a polished route runner and adept in a pro-style offence after three seasons under Nick Saban.

While Jeudy was impressive last year (77 receptions, 1,163 yards, 10 touchdowns), it wasn’t his best season with the Crimson Tide. He won the Biletnikoff Trophy as college football’s top receiver as a sophomore in 2018 after recording 68 receptions for 1,368 yards and 14 touchdowns. 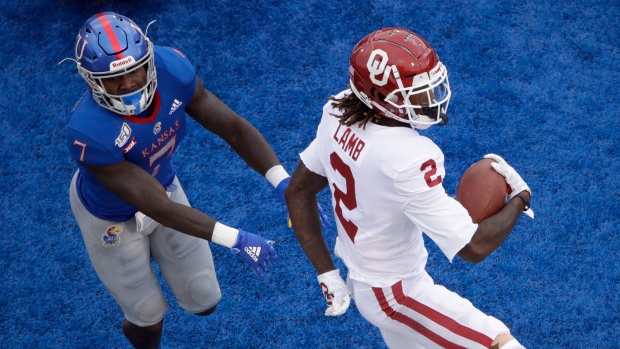 CeeDee Lamb at the NFL Combine

Lamb’s position atop the prospect rankings has been years in the making. He is not a one-year wonder or out-of-the-blue prospect, having earned accolades all three years he played at Oklahoma. After being named a Freshman All-American in 2017, and Honorable Mention All-BIG 12 in 2018, Lamb was an AP All-American and Biletnikoff Trophy finalist last year.

Lamb finished his junior year with 62 receptions for 1,327 yards and 14 touchdowns in his first season not catching balls from the Heisman Trophy winner. After playing with Baker Mayfield as a freshman and Kyler Murray as a sophomore, Lamb’s QB this year was Jalen Hurts, who was merely a Heisman finalist. 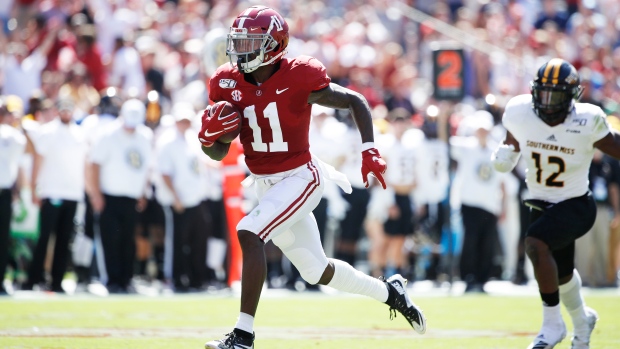 Ruggs offers a different package than Jeudy and Lamb, who are viewed as more prototypical outside receivers, and as such have often been interchangeable in mock drafts. When 49ers GM John Lynch said there were smaller, quicker guys atop the prospect rankings, he could have been talking about Ruggs, who is viewed more as a slot receiver that can be utilized all over the field; a potential Tyreek Hill-like playmaker.

In his battle with Jeudy to be the first Crimson Tide receiver off the board, it’s worth noting Ruggs finished third in receiving for Alabama last season with 40 receptions for 746 yards and seven touchdowns, far behind both Jeudy and leader DeVonta Smith, who will return for his senior season at the school. 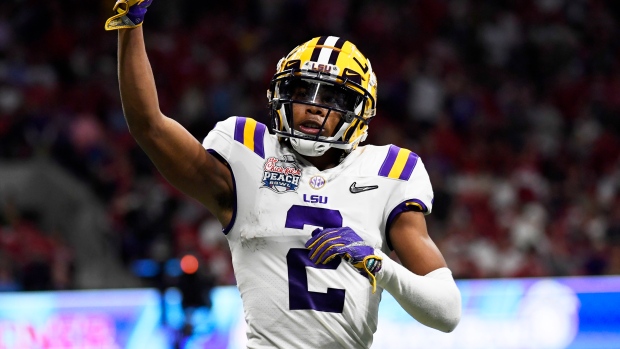 Justin Jefferson at the NFL Combine

Jefferson can play multiple positions but his move to the slot at LSU coincided with the monster numbers he put up last year – a nation-leading 111 receptions for 1,540 yards and 18 touchdowns – essentially doubling his output as a sophomore when he played on the outside (54 receptions, 875 yards, six TDs).

Jefferson also shined when it mattered most, racking up 14 receptions for 227 yards and four TDs in the National Championship Game. That, combined with his impressive NFL Combine performance, surely gave him points as a high-pressure performer on scouting reports.

Other wide receivers to keep an eye on in the early portion of the NFL Draft: (in alphabetical order)

Aiyuk is the top receiver prospect to come from the junior college route, and enters the NFL Draft with only one solid year of production in FBS play, putting up 65 receptions for 1,192 yards and eight touchdowns as a senior last year. Aiyuk is also a proven kick returner.

Another big program prospect, Higgins comes out of Clemson tied for most receiving touchdowns in school history (27) with former first-rounders DeAndre Hopkins and Sammy Watkins. At 6-foot-4, Higgins is viewed as a potential top red zone threat.

Mims has one of the most impressive size-speed combinations in the receiver class this year at 6-foot-3 and with a 4.38 40-yard dash. Mims’ production at Baylor was inconsistent, but he finished with a career-high in receptions (66) and touchdowns (12), to go along with his 1,020 receiving yards last year.

Like Lamb, Pittman Jr. was a Biletnikoff Award finalist after posting monster numbers for USC – 101 receptions for 1,275 yards and 11 touchdowns. Pittman won’t be viewed as a deep threat after running a 4.52 40-yard dash at the Combine, but at 6-foot-4 and 223 pounds, has the traits of a strong possession receiver.

Reagor is similar to Ruggs in playing style and how he projects at the next level and could be a consolation prize for a team that misses out on the Alabama receiver. While a drop in quarterback play can explain some of his weak junior season, Reagor finished with 500 fewer receiving yards last year than his sophomore campaign two seasons ago (611 to 1,061).

Shenault is another physically impressive prospect in this year’s wide receiver class (6-foot-1, 227 pounds), but his production fell from 1,011 receiving yards his sophomore season to 764 receiving yards last season, despite playing in two more games.