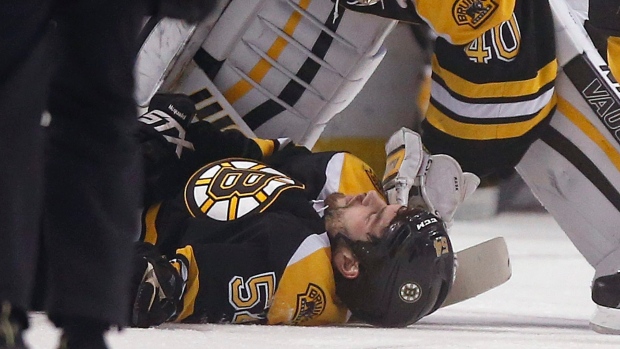 "Thumbs down" to what amounts to a rather large disconnect between NHL referees and the league's Department of Player Safety. The Washington Capitals are playing without two forwards, who were both recently suspended for acts that bothered NHL officials in the video room more than they did the refs on the ice. Zach Sill was given a two-game suspension for boarding and injuring Boston's Adam McQuaid, while Marcus Johansson will be out for two games after hitting Thomas Hickey of the Islanders in the head.

Sill received no penalty for hitting McQuaid at the time and Johansson sat in the penalty box for two minutes. The league's decision to suspend Johansson was a clear message that a minor penalty wasn't sufficient punishment.

So, there are a few things wrong here.

According to the league, the refs aren't making the proper calls.
Corrections made after the fact do nothing to satisfy the teams that deserved better during the game.

Where video review and coach challenges are concerned, it's all about transparency and getting the calls right, but that's not the case with penalty calls. It should be.

Apart from addressing the need to show that the refs and their overseers are working from the same rule book, the NHL should treat all calls by officials the same way. If the legality of goals can be determined by video and not by the refs' eyes, if coaches can challenge the failure to call goalie interference and offside, hits such as those delivered by Sill and Johansson should be subject to review on the spot, and proper penalties and power plays awarded.

It's too late the following day. And it's too late to make the argument that the refs' judgment needs to be respected. It isn't anymore.

The very earliest returns from the Ryan Johansen-Seth Jones trade are in. They are as follows:

Johansen had one goal, one assist in Nashville's 5-3 loss to Colorado. He was plus-two playing on a line with Colin Wilson and James Neal.

Jones was minus-two and without a point in the Columbus Blue Jackets' 4-1 loss at Carolina.

I will resist the urge to declare a winner so soon, but it seems obvious that Nashville has more of what is lost with Jones' departure than Columbus has without Johansen.

In an earlier post, I suggested that the Blue Jackets would have to take long, deep breaths before they traded their 33-goal man of two seasons ago, and that's because Johansen had the potential to join a list of forwards who have helped to symbolize the failure of the Columbus franchise with their success elsewhere.

The Blue Jackets' only defence is exactly that. Jones gives Columbus three of the 13 NHL defencemen drafted first through fourth since the 2004-05 lockout. His blueline partner, Ryan Murray, and Jack Johnson, acquired from L.A. for Carter, are the others.