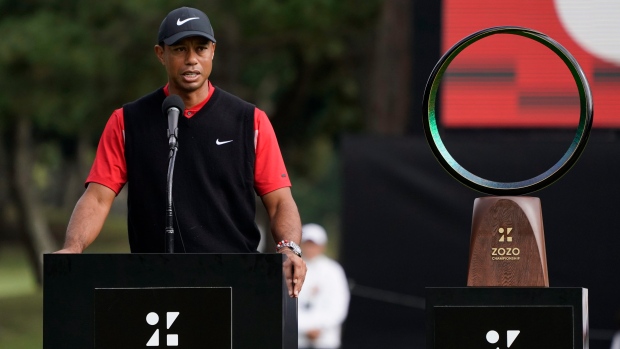 If there is one thing we’ve all learned about Tiger Woods during his remarkable career, it’s to never underestimate what he can do.

His latest win in Japan is a testament to that. The 82nd PGA Tour victory of his career, tying him with Sam Snead for the most on that circuit, comes just two months after knee surgery and nine weeks after his last competitive swing. And while he won the Masters in April, the rest of his year was mediocre at best. It certainly didn’t seem as if he was on the verge of winning.

But there was Tiger, looking fresh, free and in form leading wire to wire in a tournament where he only supposed to be there to fulfill his contractual obligations.

No one, including Tiger if he owned up to it, expected this kind of form at this point in his year.

And if most of his fans owned up to it, they probably didn’t see the 82nd win coming either. For that matter, they may not have seen 81 or 80.

It wasn’t that long ago that Woods was sitting in a press conference all but admitting that his career may have come to an end, the victim of a bad back that would not only refuse to let him swing a club but even live a normal life.

“Anything I achieve from here on in,” said Woods, “is just gravy.”

Well, the gravy boat seems to be overflowing.

Woods has now won three times in the last 13 months. In that same time period only Rory McIlroy, Bryson DeChambeau and Brooks Koepka have equalled that win total.

His play in Japan was almost vintage Woods. His driver was better than usual but his iron play was spectacular, hitting shots pin high hole after hole. His putter was the best in the field and it all added up to a dominating win.

To break Snead’s mark, Woods will wait a while. He’s not playing in this week’s World Golf Championship Event in Shanghai, China and will tee it up next in the unofficial Hero World Challenge, an event he hosts, and then head to Australia for the Presidents Cup. It’s all but certain now that Woods will serve as playing captain for the American side (and yes, I was the guy who wrote last week that he wouldn’t and shouldn’t).

It’s also interesting to see that the 15-time major winner is up to sixth on the Official World Golf Ranking. If the U.S. Olympic team was selected today, Woods would be marching in the opening ceremonies in Tokyo.

Of course, this entire positive outlook assumes that he’ll remain healthy and in form. There were lots of prognostications after he captured his fifth Green Jacket as well. He followed that up with a middling summer.

Woods, who turns 44 in December, said much of that was owing to the knee he had fixed which got progressively worse over the course of the season.

But golf is a fickle sport as pros and amateurs know. One week it’s easy, the next it’s a complicated tangle of club and ball.