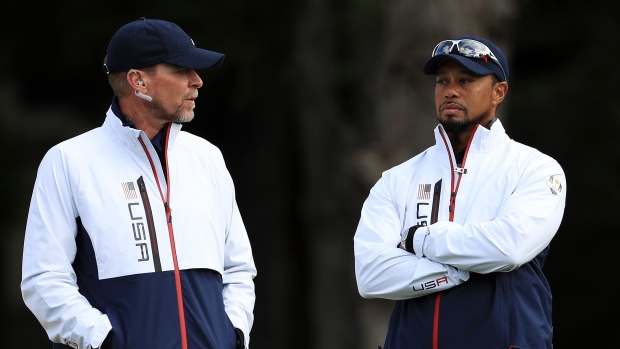 U.S. Ryder Cup captain Steve Stricker said he’s frequently spoken with Tiger Woods and revealed “things are moving in the right direction” for the 15-time major winner in his rebab.

Stricker joined SiriusXM PGA Tour Radio’s ‘Inside the Ropes’ Wednesday and delivered an update on Woods, who is recovering from injuries sustained in a single vehicle accident in Los Angeles in February.

“I’ve talked to Tiger a lot, he’s a part of this Ryder Cup family. He won’t be able to be a captain’s assistant this time around just because of his ongoing rehabilitation to try and get better to try and play golf again and that is going well. He’s progressing, he’s doing well, things are moving in the right direction and he’s very passionate about this,” Stricker said.

Woods has not played since the accident, which resulted in multiple fractures to his right leg. The injury required the insertion of a rod in his tibia and pins and screws placed in his ankle and foot.

Long-time friends and assistant Ryder Cup captains in 2016, Stricker said Woods continues to be a part of the American Ryder Cup effort.
“He’s a great guy to talk to, he’s a great guy to lean on. We’ve had a number of talks, he continues to be a part of this even though he won’t physically be here in a couple weeks. He’ll be with us in spirit and help us if we need any help from afar.”

Woods’ last tournament came at The Masters in November where he finished in a tie for 38th. His last victory came in November of 2019 at the ZOZO Championship.