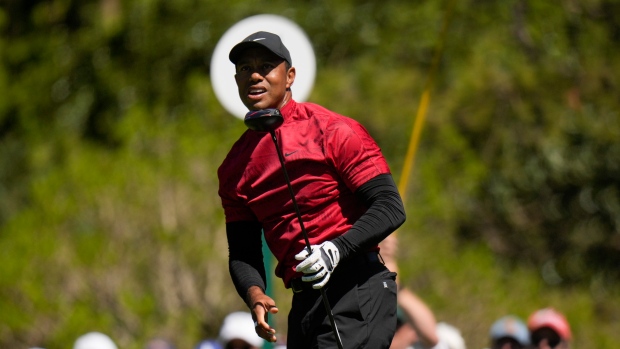 After confirming he planned to play in The Open Championship last week, Tiger Woods has added another event to his July schedule.

The JP McManus Pro-Am announced Thursday that Woods will take part in their two-day event in Ireland, which tees off 10 days before The Open.

We are over the moon to announce that Tiger Woods will be playing in the 2022 JP McManus Pro-Am. 🙌

Woods told Sky Sports following his final round at the Masters Sunday that he planned to play in fewer tournaments moving forward, but said he wanted to take to the course at St. Andrews this summer. He added that he was undecided on playing in the PGA Championship at Southern Hills in May or the U.S. Open at The Country Club in Brookline, Massachusetts, in June.

"It'll be just the big events," Woods said. "I don't know if it'll be Southern Hills or not. But I am looking forward to St. Andrews. That is something that is near and dear to my heart. I've won two Opens there, it's the home of golf. It's my favorite golf course in the world, so I will be there for that one.

"But anything in between that, I don't know. I will try, no doubt. Like this week, I will try to get ready for Southern Hills and we'll see what this body is able to do."

The Open will celebrate its 150th anniversary at the Old Course at St. Andrews in Scotland, starting July 14. Two of Woods' three victories in The Open came at St. Andrews, in 2000 and 2005.