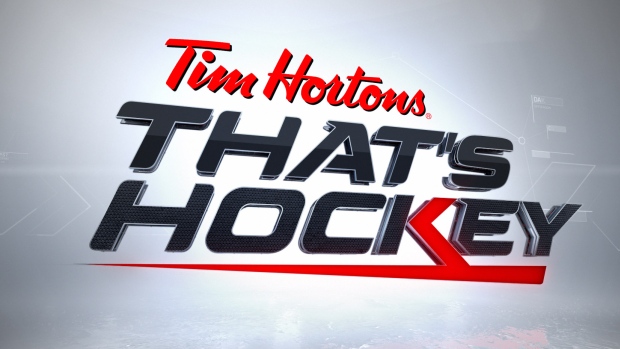 Just in time for puck drop on the 2014-15 NHL regular season, Tim Hortons and TSN today announced a partnership that will see Tim Hortons become the title sponsor of That's Hockey, the most-watched daily hockey show in Canada.

In addition to becoming a title sponsor, Tim Hortons will also be integrated into the show's segments and features, as well as into TSN's package of regional Toronto Maple Leafs, Ottawa Senators, and Winnipeg Jets games. Highlights include:
-    Timbit Tidbits, a daily feature looking at notable stats and facts from the hockey world
-    Weekly sponsorship of Post2Post, a breakdown of the highs, lows, and intricacies of goaltending performances with TSN Hockey analyst Jamie McLennan
-    Sponsored Keys to the Game features during Leafs, Sens, and Jets games on TSN

"Hockey in Canada is a natural fit for Tim Hortons. Our history has an intrinsic connection with this sport – it is a part of our DNA. From our founder, NHL great Tim Horton, to our presence in arenas, on jerseys, and in the daily routines of Canadians that love and play this incredible game," said Peter Nowlan, Chief Marketing Officer, Tim Hortons Inc. "We're proud of our hockey history, and this new sponsorship of TSN's That's Hockey is the latest way we are able to bring news about the game and its biggest and brightest moments to Canadian fans."

"Tim Hortons is deeply rooted in the Canadian hockey landscape. They are a huge supporter of the game," said Nathalie Cook, Vice-President, Sales and Brand Partnerships, TSN. "We are Canada's top source for daily hockey news and Tim Hortons is the country's go-to choice for coffee, making this both a strategic and meaningful alliance for TSN."

What's Your Tim's Order?
We asked the members of the TSN Hockey team arguably the most Canadian question ever: What's your standard order at Tim Hortons? They shared their responses:

Gino Reda
My order: For well over a decade through my oldest boy's hockey career, I was all about the Cinnamon Raisin toasted bagel with light cream cheese and a medium coffee with milk. Standing by the glass in the offensive zone, using the dasher board to hold my Timmy's, watching my kid grow up on the ice. Now eight years later, with my oldest having moved away, I'm back in the same spot at the rink, watching my little guy begin the same journey. I'm a little older, so it's a Greek yogurt instead of the bagel, but I'm still "milk no sugar," and still loving the view at the glass.
Favourite donut: Chocolate Glazed

Aaron Ward
My order: Large Double Double with two sweeteners. I order it most often in the International Departures terminal at Pearson Airport when I'm purchasing my 144 premade packets of Tim Hortons coffee to take home to North Carolina. The ladies at Tim Hortons know me as "that guy who buys all that coffee."
Favourite donut: Apple Fritter (but my real go-to is 10 Sour Cream Glazed and 10 Apple Fritter Timbits)

Darren Dreger
My order: Medium, regular. Always. Seldom stray. I usually order it en route to my kids' hockey games or on my way to work. My weekend ritual is the Turkey Sausage Breakfast Sandwich. I always go to the same locations – all three are owned and operated by my good friend Matt Hanley, who has been an excellent supporter of minor hockey in the Whitby area.
Favourite donut: Sour Cream Glazed

Jamie McLennan
My order: I love the grilled cheese with chili on the side. I order that during winter when I'm coming to the studio to watch games and do a show. Thankfully, the Tim's location not far from the TSN studio is always there when I need it.
Favourite donut: Sour Cream Glazed (with a hot chocolate)