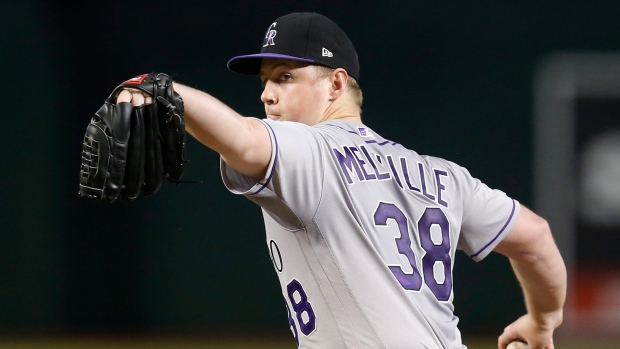 PHOENIX — Tim Melville had to pause for a moment to clear his throat of some whipped cream.

He'd gotten the traditional condiment treatment in the showers from his Colorado Rockies teammates, in celebration of his first major league win.

Melville pitched seven innings of two-hit ball in his first big league appearance in almost two years, and the Rockies cruised to a 7-2 win over the Arizona Diamondbacks on Wednesday.

Melville, a 29-year-old right-hander with just six previous major league appearances who started this season in independent ball, limited Arizona to a first-inning double and a sixth-inning home run by Ketel Marte to go with four strikeouts and two walks. He also picked up his first hit — a two-out, fourth-inning single — and his first two career RBIs.

In April, Melville wasn't on a team when he came to a game as a fan at Chase Field.

"You win or you learn. I never look at it as losing," Melville said. "I've had a lot of ups and downs throughout my career and other opportunities in the big leagues. I'm very thankful for this one."

Melville was an emergency call-up from Triple-A Albuquerque earlier Wednesday to start in place of Jon Gray, whom the Rockies before the game placed on the 60-day injured list with a left foot fracture.

"I told him after the game, timeless. That's a throwback pitching style game. He could have pitched in the '20s, could've pitched in the '50s, '70s, '80s," Rockies manager Bud Black said. "That was fun to watch. A guy that understands how he gets his outs, how he changes speeds. He stayed just within himself and did his thing."

Colorado won the season series with Arizona, 10 games to nine. Alex Avila also homered for the Diamondbacks, who had their four-game win streak snapped.

The Rockies jumped on struggling Mike Leake (9-10) early with two runs on three straight singles and a fielder's choice in the first.

In the fourth, a hit batter, four singles and a sacrifice fly produced three more runs and a 5-0 lead. Leake got through five innings and was charged with five runs on eight hits. He's allowed 17 earned runs on 26 hits in 16 innings over his last three starts.

"Sometimes balls through holes can beat you," Leake said. "I got a little elevated towards that fourth inning. I could have stayed off the plate or more down."

Melville executed a squeeze bunt in the sixth to drive in Yonathan Daza, and Charlie Blackmon drove in his second run of the day with a single after Trevor Story led off the seventh with a walk and stolen base.

Marte hit his 27th home run of the season in the sixth, a solo shot to right field. Avila took Jesús Tinoco deep in the eighth for his ninth of the year.

"The theme here is we never got anything going offensively," Diamondbacks manager Torey Lovullo said. "I think we were prepared, we just went out of the zone (swinging) too often."

Diamondbacks right-hander Joel Payamps made his major league debut and allowed two runs on four hits in three innings. The 25-year-old from the Dominican Republic also had three strikeouts, with his first one as a big leaguer coming against the Rockies' Garrett Hampson.

Diamondbacks: After Thursday's off day, the Diamondbacks are off to Milwaukee for a three-game series with the Brewers in a matchup of teams trying to stay in the post-season hunt. Arizona has RHP Merrill Kelly (9-12, 4.63) set to start Friday's series opener. The Diamondbacks have lost five straight at Miller Park.