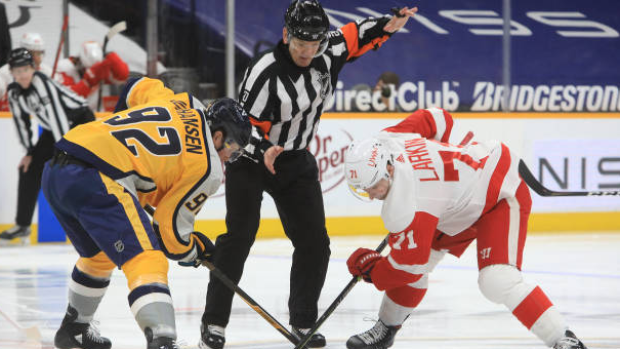 The National Hockey League acted swiftly, sending veteran referee Tim Peel into early retirement on Wednesday just hours after a hot microphone inadvertently broadcast his desire to make a penalty call against the Predators in Nashville on Tuesday night.

Peel could be heard explaining why he whistled Predators forward Viktor Arvidsson for tripping in the second period.

“It wasn’t much, but I wanted to get a [bleeping] penalty against Nashville early in the …,” Peel said on the television broadcast, before the audio cut out.

The league responded by declaring Peel will “no longer work NHL games now or in the future,” according to senior vice-president of hockey operations Colin Campbell.

Peel, 53, was scheduled to work his final game on April 24 in his hometown of St. Louis, the conclusion of a 26-year NHL career that saw him call 1,361 regular season and 90 Stanley Cup playoff games, plus the 2014 Olympics in Sochi, Russia.

“Nothing is more important that ensuring the integrity of our game,” Campbell said in a statement. “Tim Peel’s conduct is in direct contradiction to the adherence to that cornerstone principle that we demand of our officials and that our fans, players, coaches and all those associated with our game deserve. There is no justification for his comments, no matter the context or his intention, and the National Hockey League will take any and all steps necessary to protect the integrity [of] our game.”

There’s no indication that this incident will lead to an audit of the way games are officiated. The league doesn’t appear to have an appetite, in this 56-game shortened season amid a global pandemic, to overhaul its officiating process.

Nonetheless, the NHL has arrived at what should be a significant moment of self-reflection.

Because it’s one thing for the notion of “make-up calls,” which have seemingly been part of the fabric of the game since the beginning of time to exist in theory, but it’s another to hear it with your own ears.

At its root, as longtime NHL referee Paul Stewart tweeted, Peel “pre-judged” the play, which is “the antithesis of all we are taught.”

Predators forward Matt Duchene said in a radio interview with 102.5 FM The Game in Nashville on Wednesday that Peel was actually talking to teammate Filip Forsberg during the clip in question.

“He told our bench that,” Duchene said. “So, really bizarre. I just think that can’t happen. I mean, imagine a scenario where they score on that power play, we lose the game, and we miss the playoffs by a point. That could happen. That is not out of the realm of possibility, right?”

No one likes to see how the sausage is made. Now that we’ve potentially seen a glimpse of it, the big question is whether the recipe should be different moving forward.

But there are plenty of other pressing questions left unanswered, too.

It’s great that the NHL acted with expediency, but with Peel so close to the finish line in a pockmarked career, what would the penalty have been for a 32-year-old official with more runway left in the game?

“He’s a veteran ref. This is his last year anyway, so that’s maybe why they let him go rather than suspending him or fining him,” Duchene surmised in the radio interview.

More importantly: Was Peel’s comment a symptom or a disease?

The NHL has seemingly held one man accountable for a larger issue that has enveloped the game for generations.

Longtime Boston Bruins executive Harry Sinden railed against the idea of “game management” by officials in the 1970s and 1980s. Heck, Peel himself seemed to acknowledge the notion of game management when he met a reporter in a bar in 2015 and explained two blown calls, which earned him a one-game suspension.

It’s difficult to find proof in the numbers. The NHL has averaged six penalties per game this season and they are nearly evenly split between home team (2.9 per game) and visiting team (3.1 per game), according to a source. That is generally the average over the past five seasons, according to ScoutingTheRefs.com, which is home teams get 52 per cent of the calls in their favour.

So, does that speak to a conscious effort by referees to find balance? Or is that simply how the games have gone?

“I don’t think there’s a place in hockey for [make-up calls],” Duchene said in the radio interview. “You’ve got to call the game. I’ve always been frustrated when I see even-up calls. If one team is earning power plays, you can’t punish a team because the other is not.

“That call [on Arvidsson] was not a good call. We were watching the game and we were like ‘What the heck is that? That isn’t close to a penalty.’ I hope that’s not something that goes on with more officials. But there’s definitely nights where you’re skeptical of it, for sure.”

A television broadcast’s failure to kill a microphone – the NHL’s second embarrassing hot mic incident this season – has opened a window for the NHL to give teams, players and fans more of the consistency they crave.

There is an opportunity now to call the rule book exactly as it is written from training camp through the Stanley Cup Final, that a penalty in the first period of the preseason is still a penalty late in overtime with Lord Stanley on the line.

Only time will tell if Peel’s incident is the impetus that causes the NHL to jump through it.