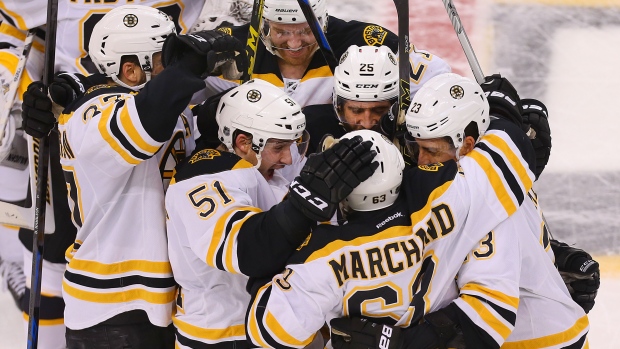 The weightiest - and most contentious - agenda item at the NHL's GM meetings will be whether to use video review for goalie interference and, if so, how to implement it.

For example, if a goalie is deep in his crease, closer to the goal line than the top of the crease, and an opposing forward sets up in the blue paint at the top of the crease, making no contact with the netminder, and a goal is scored, is that goalie interference? Some GMs say yes; some say no. The league needs to sort that out before they can open up the video can of worms.

Historically, the GMs have avoided expanded use of video review to assist the on-ice officials in determining correct calls.

NHL Hockey Ops offered to the GMs in recent years the opportunity to have the NHL's Toronto Hockey Ops office automatically review four-minute high-sticking minors to make sure it was a legitimate infraction, not an accidental high stick from a teammate. The GMs eschewed that, citing a desire to NOT officiate the game from the video room in Toronto.

It seems odd (to me, anyway) that there is growing support for expanded video review on goalie interference, which one might suggest has a high degree of subjectivity. But there's no question the GMs appear keen to broaden video to include goalie interference.

If so, as usual at these meetings, the devil will be in the details, specifically how to implement it.

One end of the spectrum would be for NHL Hockey Ops in Toronto to control the process 100 per cent. That is, initiate all reviews in Toronto and either support or overturn the referees' calls on the ice. The other end of the spectrum would be to leave the game entirely in the hands of the on-ice officials, putting a monitor in the penalty box and allowing the referees to review their own call and either uphold or overturn it with no input from Toronto.

The middle ground, or what the league is likely to propose as the working model, would be for both parties – Hockey Ops in Toronto and the referees in the penalty box – reviewing the video simultaneously and communicating throughout the process, with the final authority belonging to Hockey Ops in Toronto.

As you can imagine, there's going to be a lot of discussion on this one.

It is now or never for three-on-three overtime in the NHL.

“It is, isn’t it?” said Ken Holland, who has been banging the three-on-three drum for years and knows the moment of truth is at hand.

The Detroit Red Wing general manager has long been an advocate of going to three-on-three overtime if four-on-four overtime fails to produce a winner. The goal, of course, is to reduce the number of NHL games that go to a shootout.

At face value, it looks like, and should be, a slam dunk for the NHL.

The American Hockey League has this season been using three-on-three overtime when four-on-four overtime ends. The results have been noteworthy.

Seventy-eight per cent of all of overtime games in the AHL end with a goal in OT. In the NHL, where there’s only four-on-four OT, the OT resolution rate is just a shade over 50 per cent.

Using more understandable numbers, roughly one in four AHL games that are tied after 60 minutes go to a shootout while approximately one in two NHL games tied after regulation get settled by a shootout.

So what are we waiting for? The NHL has no desire to do away entirely with the shootout, but most right-thinking individuals would like to see fewer games decided by the equivalent of a skills competition.

Holland has been lobbying hard amongst his NHL GM peers. He thinks there’s enough support to see his vision get endorsed by the NHL GMs who are meeting in Boca Raton, Fla., today and lead to an official rule change for next season.

But Holland has also been around the game long enough to know there’s a long way to go from the run up to the annual March general managers’ meeting and official approval for a rule change in June from both the NHL Competition Committee (read NHL Players Association) and NHL Board of Governors.

The success of the AHL trial would appear to be self-evident.

But there’s always an argument to be made against change. It’s hockey, after all.

The AHL isn’t the NHL, some say, suggesting statistics don’t always translate equally from the lower level to the higher level.

And since the AHL overtime period is seven minutes long – three-on-three for the first three minutes or until the first whistle after the three-minute mark – and the NHL OT is only five minutes, perhaps the percentages aren’t an apples-to-apples comparison. How much higher would the NHL’s resolution rate of just over 50 per cent be if the OT period were seven minutes of four-on-four instead of five minutes? Is it the three-on-three component or the extra two minutes that leads to the higher resolution rate?

In any case, do we really want to make NHL games longer? And if so, would the NHLPA sign off on the extra time and effort required? NHLPA executive Mathieu Schneider is already on record suggesting the union may be opposed to the concept, saying an additional three minutes of three-on-three would put additional wear and tear on the league’s best players.

Of course, one could argue if more games are settled in extended three-on-three overtime and fewer games go to shootouts, the time element may be a wash.

Holland’s vision is for four minutes of four-on-four, followed by three minutes of three-on-three. It’s what he uses when he’s commissioner of the Traverse City Prospects Tourney each September. But how do you implement it in the NHL regular season? Do you blow the horn at the four-minute mark? What if a player is a on a breakaway at 3:55 of OT? Do you take away a potential game-ending chance to play three-on-three?

That’s why the AHL chose to go with the first stoppage after the three-minute mark, though on many nights there isn’t a stoppage for minutes after that. Some nights, there’s no more than a minute or two of three-on-three play in the AHL.

It remains to be seen not only if the NHL takes the three-on-three plunge but how precisely it would implement it if goes in that direction.

The NHL thought it addressed this situation a year ago with a minor rule change. The league opted this season for the “long change” in overtime, making teams switch ends at the conclusion of regulation time, the thinking being that it would lead to an increase in OT scoring because tired defenceman would have a longer skate to the bench. But the results never materialized. OT outcomes basically flat-lined, which is to suggest the time for three-on-three is now at hand.

Now or never, it would seem.

When Florida Panther goalies Roberto Luongo and Al Montoya were injured in the same game recently, and the much-heralded scramble was on to find a suitable fill-in, those with really good memories would know this situation wouldn't have been a problem in the 1950s.

When Gregory was running the Toronto Marlies and St. Mike's junior teams in the 1950s for the Smythe family that owned the Toronto Maple Leafs, one of Gregory's jobs was to ensure one either a Marlie goalie or a St. Mike's goalie was at Maple Leaf Gardens for every home Leaf game. If either the Leafs or the visiting team lost a goalie or both goalies to injury, the junior goalie, or house goalie, was at their service.

"They were signed to amateur tryouts, because they were amateurs, and they would get $25 if they played in a game and $10 if they didn't," Gregory said. "Bob Davidson (Toronto's chief scout) was really big on the idea. If you look at some of the game sheets from the 50s, you will see there were occasions when these (house) goalies actually played. But there was always a goalie there if one was needed."

Re-introducing "house goalies" is one of a number options the league is looking at to avoid a repeat of what happened in Florida when an injured Luongo, who was out of the game, came back in the third period to relieve an injured Montoya.