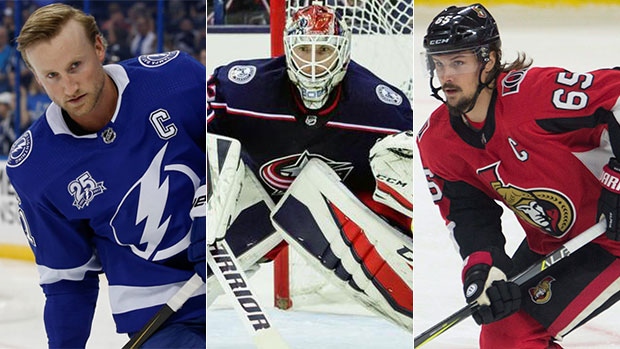 American Thanksgiving is one of the first checkpoints of the NHL season, and it's where we really start to see the contenders separate themselves from the pretenders in the playoff race.

It's also where we start to get a real look into potential finalists for end-of-year awards. With a quarter of the season in the books, I'll take today to review races for the Hart, Vezina, and Norris trophies:

Let's start with the Hart!

Assuming Tampa Bay continues to roll over the rest of the Eastern Conference, this is going to be a fascinating one to watch. The Lightning's top-line of Steven Stamkos, Nikita Kucherov and Vladimir Namestnikov is far and away the best trio in hockey. Both Stamkos and Kucherov have been brilliantly productive. Stamkos leads the league with 35-points (10G, 25A) and Kucherov is second in the scoring race with 33 points (17G, 16A). Stamkos has essentially become the playmaker with Kucherov as the finisher.

So how do we tease out who is really driving the boat on that line? It's tough to do, especially when these two guys are glued to each other all the time. We've seen this scenario before - Patrice Bergeron and Brad Marchand in Boston are the most prominent example - and answers are easy to find. What we can do, though, is compare the players head-on and observe the variances in their underlying numbers.

Here's a grid of nine key performance metrics for our three finalists. Here, the darker the cell, the better the number (data via Corsica and Hockey Reference):

There are two key takeaways here for me. On the Tampa Bay side, it's the fact that Stamkos seems to have marginally better year-to-date numbers across the board – whether it's how well his line is driving shots, or the expected goals from the shot differentials his team is producing. Knowing that Kucherov has assumed the “goal scorer” role and Stamkos has the “distributor” role, one can only conclude that Kucherov is marginally benefitting from Stamkos more than vice versa. To that end, I give Stamkos the slightest edge.

But the second takeaway is important – outside of the counting numbers (Tarasenko is nine points behind Stamkos through Tuesday), Tarasenko looks just as good as the Bolts' duo here. I wouldn't discount Tarasenko's chance of winning this either. He's become the league's preeminent sniper and is playing a key role on arguably the best team in the Western Conference. Not to mention that the Blues mercilessly mash opponents whenever he's on the ice. Just look at the on-ice goal numbers if you want evidence of that – for every one goal an opposing team gets, the Blues (with Tarasenko on the ice) get four! An incredible rate right now.

This one is a little more cut and dry for the top spot. While all three goalies are out to fantastic starts, Bobrovsky has been an absolute wall for the Blue Jackets. Not only does he hold some of the league's most impressive save percentage splits across all game states, but he's been a work horse – only Frederik Andersen in Toronto and Jake Allen in St. Louis have seen more ice than the Russian superstar.

The really interesting note about Bobrovsky though is that he's way out-performed expectations. If you factor in shot volume and shot quality faced, our expectations for Bobrovsky's save percentages are much lower - regardless of whether you're looking at even-strength or all situations. Out-performing an expected save percentage is usually the mark of a great goaltender and Bobrovsky has delivered in a big way here.

Bobrovsky has stopped a ridiculous 94.3 per cent of shots at 5-on-5. Using Corsica's calculations, our best guess at what save percentage we should expect from him is 91.7 per cent, or 2.6 per cent less than actuals. That's just ridiculous!

You'll notice that Quick and Jones have similarly high numbers in all situations and that's primarily because they have been comparatively great on the penalty kill. That's enough to get them in the Vezina discussion, but it still puts them a reasonably distant second and third from the Blue Jackets netminder.

They've been great. He's just been that much better.

With all due respect to Alex Pietrangelo's amazing start (and it has been amazing), it's hard to envision a scenario where Erik Karlsson doesn't win the Norris. But I've also said the same thing in years where Karlsson finished runner-up to the likes of Drew Doughty and Brent Burns, so nothing's guaranteed!

The general consensus around Karlsson's game is that he's probably 80 per cent or so back from an injury that ended with a surgery removing half of his ankle bone. And through the first quarter of the season, it is certainly fair to say that Karlsson's had better stretches in his career.

That said: the Norris race isn't about comparing Karlsson to Karlsson. It's about comparing him to everyone else whether he's completely healthy or not. And he's been - once again - obliterating the competition all season long for Ottawa. So much so, that a head-to-head comparison against truly elite defenders like the aforementioned Pietrangelo and Tampa Bay's Victor Hedman is, well, not particularly close:

As you can see, pretty much any individual measurement shows that Karlsson's out-performing the other two finalists. He's scoring nearly double (!) the amount of points every 60 minutes. And as Jonathan Willis pointed out earlier this week, his scoring is at the same pace Connor McDavid was at one year ago when he won the Art Ross.

But it's not just the scoring. Karlsson generates more shots, more goals, drives play like a maniac (Ottawa is getting an absurd 55.6 per cent of shots with him on the ice, and a very pedestrian 46.6 per cent with him off), and creates bundles of scoring chances for himself and his teammates. It's worth noting that Ottawa - a mediocre team at the quarter-mark - has a far better expected goal rate with Karlsson on the ice than Pietrangelo and Hedman on truly elite hockey teams.

Karlsson has won two Norris trophies already and should probably have four. And considering how many great defenders the modern era of hockey has produced – Pietrangelo and Hedman are wondrous and have been for some time – that's a huge compliment. More than anything, it speaks to the massive gulf in performance between Karlsson and, well, everyone else.