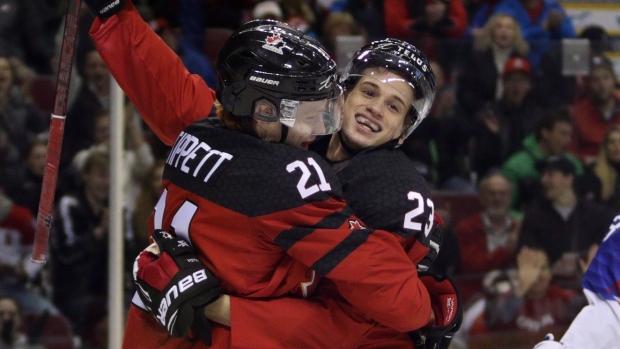 A few hours after the Hamilton Bulldogs traded their captain in MacKenzie Entwistle to the Guelph Storm, fellow Canadian junior teammate Owen Tippett is also on the move in the OHL as the Mississauga Steelheads have traded the 19-year-old to the Saginaw Spirit.

Going the other way is forward Aidan Prueter and six draft picks.

The Mississauga Steelheads have traded Owen Tippett to @SpiritHockey in exchange for C Aidan Prueter and 6 draft choices.

“We would like to thank Owen Tippett for his time with the Mississauga Steelheads. He is a very special person and we wish the very best for him. Owen is a wonderful teammate and as fans have seen, a very electrifying hockey player. He will be missed and we wish him well,” Steelheads head coach and general manager James Richmond said in a statement.

Selected 10th overall by the Florida Panthers in the 2017 NHL Entry Draft, Tippett was one of Canada's better players at the world juniors in Vancouver, scoring two goals and two assists over five games.

Tippett has netted 19 goals and added 14 assists over 24 games with Mississauga this season and has one goal and one assist over five games with the Springfield Thunderbirds, Florida's American Hockey League club. The native of Peterborough played seven games with the Panthers last season, recording a single goal.

Saginaw is third in the Western Conference of the OHL with a 22-11-2 record.