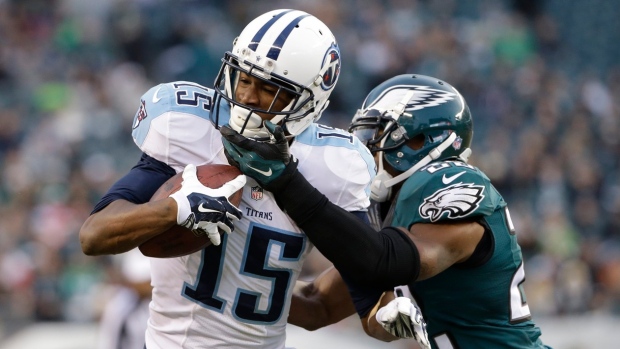 VIRGINIA BEACH, Va. - Tennessee Titans wide receiver Justin Hunter was granted bond by a Virginia judge on Tuesday, a day after turning himself in to authorities in his hometown on a charge of malicious wounding.

The charge stems from a late-night fight at the Sandbar Raw Bar in Virginia Beach's oceanfront resort area during the July Fourth weekend, according to Virginia Beach police.

Commonwealth's Attorney Wendy Alexander said Hunter started the fight on July 3 when he interrupted a conversation a man was having with someone else. After words were exchanged, Hunter punched the man in the face twice, she said. Alexander said a melee ensued, and multiple people began fighting. Once the bar was cleared, Alexander said, the man who Hunter originally punched was bent over and spitting out blood on the sidewalk, where Hunter "sucker punched" him again, before hopping into a waiting vehicle.

She said that the man suffered a broken jaw and a cracked tooth as a result of the fight and had to be taken to a hospital out of concern he may have suffered internal injuries. Nobody else has been charged in the incident, although Alexander said Hunter's celebrity as a professional athlete made him easier to identify. A warrant for Hunter's arrest was issued on Friday, and after Virginia Beach police contacted Titans' security personnel, Hunter arranged to turn himself in Monday.

General District Judge Daniel Lahne said Hunter could be released on a $25,000 secured bond as long as he remains on good behaviour, doesn't consume alcohol or drugs and abides by a curfew lasting from 11 p.m. to 5 a.m., among other things.

"I guarantee you, nothing good happens after midnight," Lahne said during the arraignment.

In the courtroom were Hunter's relatives and former high school football coach, who were told by Hunter's attorney not to speak with reporters. Hunter appeared by video conference and said little throughout the hearing. A preliminary hearing is scheduled for the morning of Sept. 3, less than 12 hours before the Titans are scheduled to host Minnesota in their final preseason game.

Tennessee traded up six spots to draft the 6-foot-4, 207-pound Hunter out of the University of Tennessee in 2013 with the 34th pick overall. Hunter played in 14 games as a rookie, catching 18 passes for 354 yards and four touchdowns. He played 12 games before a season-ending injury in 2014 and finished with 28 receptions for 498 yards and three TDs.