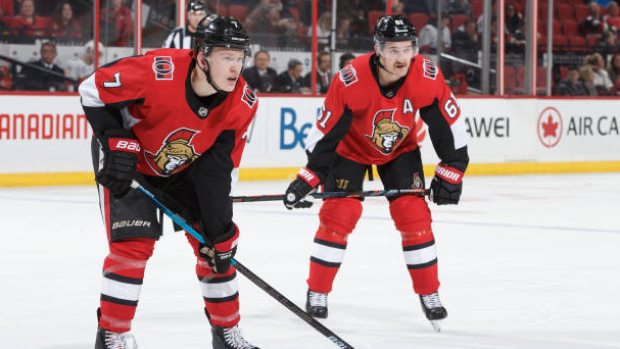 In what’s been a long, strange season for Tkachuk – a rookie year with 43 different faces in the Sens’ lineup – Stone was the one confidante he could lean on. More than just a mentor, Stone became a close friend.

Trades are life in the NHL. But it hasn’t been easy to cut the cord.

“We were always together,” Tkachuk said. “It was tough to see him leave. We grew so close.”

The connection was made before the Sens drafted Tkachuk fourth overall last June. Stone is a Winnipeg native. Stone’s agent, Craig Oster, is Tkachuk’s uncle.

That made it natural for Stone to take Tkachuk under his wing, inviting the 19-year-old to live with him and his girlfriend, Hayley.

Tkachuk said he wasn’t ready to live on his own yet, so he lived with Stone until the start of the New Year in January.

Stone cracked this weekend on Hockey Night in Canada that Tkachuk was “easy to live with” even if he was “a little bit useless at times.”

“We were really close,” Stone said. “We hung out together at home, on the road. I had a really good relationship with his mom, Chantal, and his dad, Keith. They raised their kids the right way.”

Keith and older brother Matthew may have given Tkachuk advice, but he was like a sponge around Stone, soaking up any and every tidbit along the way.

“He was tremendous for me. On the ice, he’s one of the best players in the NHL. Off the ice, always being around, I saw how he takes care of himself, how well-liked he was by our teammates, staff and community. I learned so much from a guy like Mark,” Tkachuk said.

Tkachuk even taught Stone a few new tricks. One of the few things he brought to Stone’s house was his Xbox. He plugged it into one of the two TVs that Stone had side-by-side in his basement, turning it into an unexpected gamer’s lounge.

Never mind that Stone hadn’t picked up a controller in five years.

Tkachuk said playing those games was “one of those things you’ll remember forever.”

The chemistry from Fortnite and a little Call of Duty carried over to the ice. Playing on a line together, Stone hit a career-high in goals in Ottawa (28) and has now set a career-best in points (67) with five points in his first seven games for the surging Golden Knights.

With 16 goals and 36 points, Tkachuk is tied for third in the rookie scoring race. Interim Sens coach Marc Crawford marvelled at the “subtle input” that Stone would provide on the bench to Tkachuk.

All of that meant saying goodbye on Feb. 25 was difficult.

Tkachuk said they were at the rink. Stone told him what was happening, but the news hadn’t broken yet, so they didn’t want to “make a big deal about it.”

The transition has been stark on the ice. Crawford said Jean-Gabriel Pageau now is the linemate who might offer a word or two on the bench.

But it’s different. Stone passed the torch. Tkachuk is now counted on to be one of the faces of the Senators moving forward.

“I think he’s handled it wonderfully,” Crawford said of Tkachuk. “You move forward. I think our guys have moved forward. They realize it’s them – they’re the guys that now have to keep progressing.”

Crawford said Tkachuk has come alive again in the last handful of games. He enters Monday night’s contest against the Flyers with four points (two goals) in his last five games. He’s a certified Flyers Killer, with four of his 16 career goals coming against Philadelphia.

“I think he’s really taken a step here in the last couple of weeks,” Crawford said. “You can see the adjustment he’s making. People know what he plays like. He’s made the subtle adjustment of, ‘You think you’ve got me, but I’m going to add this dimension to my game.’”

The added dimension, Crawford said, has been the way he’s re-engaged around the net. He is a “handful” for opposing defencemen – or, as Tkachuk says, just being a Tkachuk.

“I’m going to continue to be who I am,” Tkachuk said.

It’s a brave new world now for Tkachuk. But that doesn’t mean he’ll lose touch with Stone any time soon.

“He was pretty special to me. I’ll forever remember that,” Tkachuk said. “I know he’s happy. He just signed a great ticket in Vegas. We’re already starting to plan out when we’ll see each other again.”