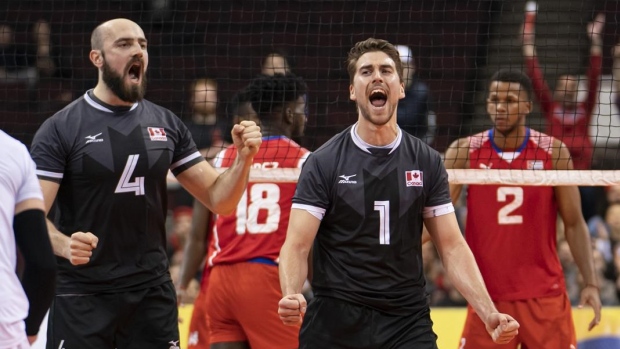 When TJ Sanders isn't on the volleyball court running Canada's offence, he's often laying on his back with his feet on a chair courtside.

Canada's starting setter has managed a painful back injury for two years. The 28-year-old from London, Ont., does his best to play through it.

"I was doing a standing float serve all game which I've never done since Grade 8 I think," he said.

The men's volleyball team qualified for the Tokyo Olympics in the last-chance tournament.

Sanders anticipated his back would require compromises and workarounds to play this summer.

The COVID-19 pandemic forcing the International Olympic Committee and Japan's organizing committee to postpone the Tokyo Games to 2021 opens a window of opportunity for injured athletes.

"I would have probably ended up going into Tokyo with some handicaps," Sanders said. "Now, I have this beacon of hope which is time on my side a little bit.

"In theory, if I can develop certain back muscles and core muscles and hip mobility . . . it can take all the brunt as opposed to my spine taking the brunt of it.

"It's not like you can just go out and get a six pack. You need to build these really small muscles that you can't load up too quickly. Having an extra year, I'll be much further along in that process than I would have been this summer."

When the women's sitting volleyball team didn't qualify for the Paralympics in a zonal tournament last August, Angelena Dolezar decided to go ahead with surgery on her left leg Feb. 13.

Within days of her procedure, Canada punched its Tokyo ticket in a last-chance tournament without her.

The 34-year-old from Edmonton, whose left leg is amputated above the knee, was determined to recover and adapt playing volleyball to the new implant in her femur by the start of the 2020 Paralympics on Aug. 25.

"It would have been a huge challenge," Dolezar admitted. "I'm ecstatic the Games are postponed. "It doesn't seem like anybody else in my program is ecstatic, so I try to curb my enthusiasm as much as I can.

"A year allows me to actually dedicate myself to recovering and then return to sport as opposed to balancing both at the same time within six months."

The 32-year-old midfielder from Tsawwassen, B.C., optimistically put his odds at competing in Tokyo in July at 80 to 85 per cent, despite not being able to run on his injured leg right now.

"It's a long way to go from reduced weight running on an underwater treadmill back to full fitness and feeling like yourself and training and playing without pain," Pearson said.

"All signs were that I was going to be OK, but you never really know. Any setbacks between now and June really, I wouldn't have been able to make it. Now I feel like I can really push myself over the next year to get my whole body feeling right and, and making sure that everything feels good going into next summer."

If the Canadian men's basketball team qualifies for Tokyo, the squad can now include Dwight Powell.

The King City, Ont., gymnast won a bronze medal in December's world championship to give Canada an entry in women's trampoline in Tokyo.

"I'd been training with some pain and some compensations since I came back," MacLennan said.

"I'm hoping in this period of time I can kind of correct that course and when I get back, be able to manage it in a more reasonable way with less pain and hopefully with more opportunity to jump higher."

A healthy Adam Zaruba of North Vancouver, B.C., is a positive prospect for the men's rugby sevens team.

The six-foot-five, 265-pound Zaruba, who has twice tried out for the NFL's Philadelphia Eagles, injured the anterior cruciate ligament in his knee in Dubai in December.

Teammate Cole Davis from Calgary has been hampered by a groin issue.

"Now with the Olympics in July 2021, Adam and Cole both have the opportunity to complete their recoveries," coach Henry Paul said. "It would be great for the squad to see them competing again. Both players are very exciting and have huge positives for Rugby Canada."

On the women's sevens side, Olivia Apps of Lindsay, Ont., was cleared for full contact following a nine-month recovery from ACL surgery when the Canadian team halted operations due to the virus outbreak.

Canadian women's soccer midfielder Diana Matheson of Oakville, Ont., also has more time to round into form. She played her first matches in a year in March following foot surgery.

Calgary's Stefan Daniel, the first Canadian to win a Paralympic triathlete medal with a silver in 2016, suffered a stress fracture in his foot last fall.

"That took me out for a while and it was my first ever injury," Daniel said. "A tough one to heal. I would have been ready regardless, but it is nice to be able really relax about it and not take any chances at all."

This report by The Canadian Press was first published April 1, 2020

— with files from Neil Davidson