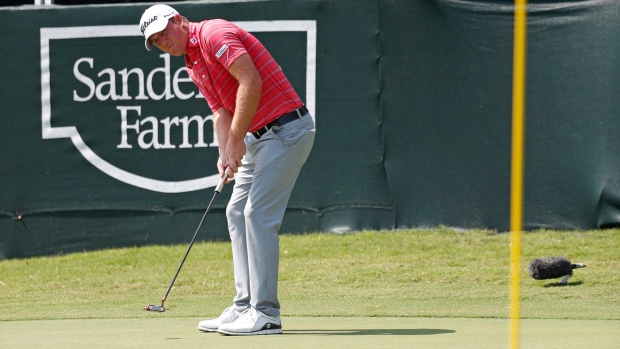 JACKSON, Miss. — Tom Hoge felt relieved to make his way back to the PGA Tour. He is starting the new season with a clear head, no stress and great scores.

One week after he was runner-up at the Greenbrier for the best finish of his PGA Tour career, Hoge opened with three straight birdies and closed with a 45-foot birdie putt for an 8-under 64 and a one-shot lead among the early starters Thursday in the Sanderson Farms Championship.

Thunderstorms moved in over the Country Club of Jackson in the afternoon, stopping play for three hours until the first round was suspended for the day. It was to resume at 7 a.m. Friday.

Of the late starters, Byeong Hun An and J.T. Poston were at 5 under.

Joaquin Niemann, the 20-year-old from Chile coming off a six-shot victory at the Greenbrier, opened with a 68.

Corey Conners of Listowel, Ont., was 1-under par through eight holes when play was called for the day.

Hoge, a 30-year-old from North Dakota, is winless in 134 career starts on the PGA Tour and has only advanced to the FedEx Cup playoffs once. Last month was the third time since 2015 he had to earn his card back through the Korn Ferry Tour Finals.

But he's back again, and he wants to make the most of it.

"There was so much pressure there for a few weeks to play well and get back out here on the PGA Tour," Hoge said. "Once you get that done, it frees you up a little bit. At the same time, you know you played well, so just kind of keep it rolling."

After a three-week break, he started the new season by posting all four rounds in the 60s for only the second time in his career. He contended on Sunday until Niemann pulled away, but it was his first runner-up on tour and took some of the pressure off.

Thursday was more of the same. He missed only four greens, and twice saved par with big putts, including one from 12 feet after finding a bunker on the 16th hole. His start, however, was ideal. He holed a 6-foot birdie putt at No. 1, stuffed a wedge into tap-in range on the next hole and made a 12-footer on No. 3.

The finish was a bonus, a 45-foot putt that rolled in the centre of the cup with perfect pace.

"Nice way to end for sure," Hoge said.

Now it gets full FedEx Cup points, and the winner gets an invitation to the Masters.

For Hoge, it's a chance to get his season off to a quick start. He knows from experience how valuable that can be. Two years ago, he tied for seventh in Las Vegas and then played in the final group and finished third in Honolulu. That was the one year he kept his card.

"Just frees up the rest of the year," Hoge said.

Brandt Snedeker, playing the Sanderson Farms Championship for the first time, opened with a 69. At No. 41, he is the highest-ranked player in the field. Among those playing in the afternoon was 17-year-old Akshay Bhatia, who turned pro this week. He was even par through four holes.