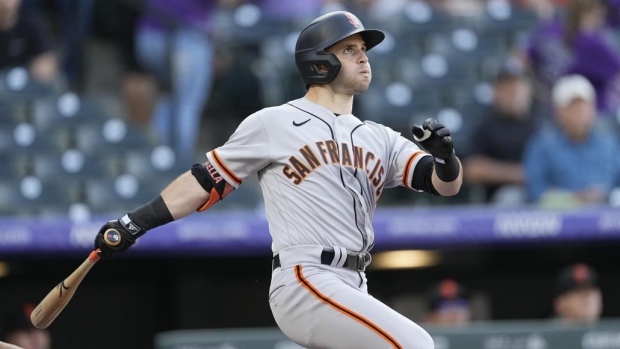 DENVER (AP) — Tommy La Stella homered on the second pitch of the game and doubled twice as the San Francisco Giants extended their dominance against Colorado with a 10-7 win over the Rockies on Tuesday night.

Camilo Doval pitched the ninth inning for his seventh save. The Giants have won eight in a row at Coors Field.

Randal Grichuk homered and C.J. Cron had three hits for the Rockies, who have dropped eight of nine overall.

La Stella grounded out in his season debut Monday night but in his second at-bat of the year he hit a 93 mph sinker into the second deck in right field. That started a 14-hit outburst, with Mike Yastrzemski and Brandon Crawford also finishing with three hits apiece.

Brendan Rodgers had an RBI single in the second for Colorado, but his second error of the game at second base started a four-run third inning for the Giants. Yastrzemski hit a two-run double, and Darin Ruf and Thairo Estrada had run-scoring singles off Rockies starter Chad Kuhl (3-2).

The Giants scored two runs each off Jhoulys Chacin and Justin Lawrence in the sixth, but Colorado scored five in the bottom of the inning — three on Grichuk’s fifth homer of the season that ended the night for starter Alex Cobb (3-1).

Giants: Manager Gabe Kapler said he thinks LHP Jake McGee (lower back tightness) will spend the minimum time on the 15-day injured list. McGee is eligible to come off May 26. ... LaMonte Wade Jr. was held out of the starting lineup with soreness behind one of his knees.

The Rockies optioned catcher Dom Núñez to Triple-A and selected the contract of catcher Brian Serven from the Isotopes. It is Serven’s first appearance on a major league roster.