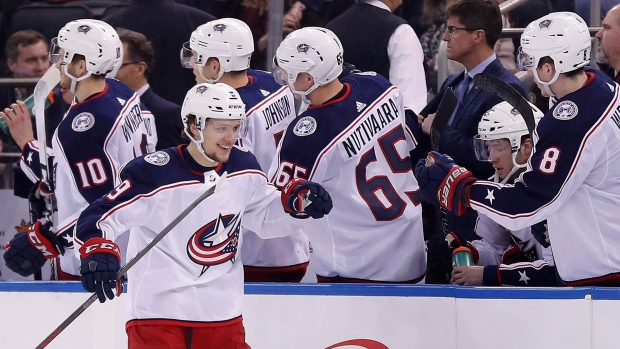 TORONTO - Everything is happening.

Matt Duchene will be pickin’ and grinnin’ in Nashville. The Vancouver Canucks are landing their top free agent target in Tyler Myers. The Dallas Stars are stealing two California stalwarts in Joe Pavelski and Corey Perry.

Yep, the NHL’s week-long interview period produced predictable results in the number of deals cooked prior to Canada Day – even though (wink, wink) contracts cannot become official until July 1 after 12 noon ET.

But there’s plenty of intrigue left for Free Agent Frenzy (on TSN from 11am et to 6pm et).

Half of the Top 10 on TSN Hockey’s Top 50 Free Agent list remained without an official home heading into Monday morning.

All eyes are on where Artemi Panarin, the alpha dog and No. 1 on the board, will land on Monday. The Rangers, Islanders and Panthers all made pitches for Panarin over the last week, but the curveball came from the Columbus Blue Jackets, who climbed back into the race and tabled an eight-year, $96 million extension offer on Sunday night.

No one can say for sure exactly why the Blue Jackets waited until the waning hours before their exclusive window to offer an eight-year deal wore off, but they gave Panarin something to think about.

So far, the Rangers haven’t been willing to engage in a bidding war. The Panthers don’t seem enthusiastic about a package deal for Panarin and Sergei Bobrovsky.

That would seemingly leave Lou Lamoriello and the New York Islanders as the frontrunner, but all bets are off.

Panarin has been asking for a seven-year deal in excess of $12 million per year, which would make him the second-highest paid player in the NHL only to Connor McDavid. The 27-year-old winger is coming off his second-straight 80-point campaign.

The Panthers attempted to land both Panarin and Bobrovsky, the ‘Bob’ and ‘Bread’ combo, but seemed destined to end up only with the two-time Vezina Trophy winner. Bobrovsky was Florida’s No. 1 priority heading into free agency.

If so, it’s possible that Semyon Varlamov – who shares the same agent (Paul Theofanous) as Panarin and Bobrovsky – could be heading to Long Island with Panarin to take over for Robin Lehner.

Where would that leave Lehner? The Carolina Hurricanes and Columbus Blue Jackets would then be the only teams left looking for netminders. Mike Smith picked the Edmonton Oilers on a one-year, bonus-laden contract, while Cam Talbot is shuffling down Highway 2 to Calgary.

And … what exactly are the Montreal Canadiens up to?

GM Marc Bergevin raised eyebrows on Saturday when he cleared out $4.85 million in cap space by unloading Andrew Shaw and Nicolas Deslauriers.

Is Bergevin interested in either Gardiner or Ben Hutton as he attempts to rebuild the left side of his defence? July 1 isn’t necessarily all about the Free Agent Frenzy, as the TSN Trade Bait board remains very much in play.

Stay tuned. Hundreds of millions will be spent. A portion of those dollars doled out will be ripe for regret. That’s part of what makes this all so fun.