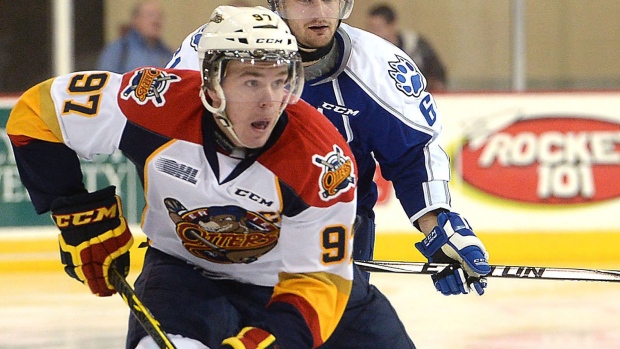 TORONTO - Connor McDavid will be out five to six weeks with a fractured bone in his right hand, an injury that could put his participation for Canada in the world junior championship in doubt.

The Erie Otters announced Wednesday afternoon that McDavid suffered a fracture of the fifth metacarpal bone in a fight Tuesday night with Mississauga's Bryson Cianfrone when he missed and hit the top of the boards. The fractured bone extends from the base of the pinkie finger to the wrist.

McDavid will not require surgery.

The 17-year-old junior hockey phenom saw a hand specialist in Toronto after X-rays after Tuesday's game were not definitive. Six weeks from Wednesday falls on Dec. 24.

"We kind of thought that there was a chance it would be like that," Otters owner and general manager Sherry Bassin said in a phone interview. "We were hoping they'd say four."

McDavid will almost certainly miss Canada's world junior camp in mid-December. Hockey Canada must finalize its roster for the tournament Dec. 25, and the team plays its first game Dec. 26 in Montreal against Slovakia.

Bassin told Hockey Canada he was confident McDavid would be ready to play in the tournament.

"Let's be honest, he's one of the best players in the world," Bassin said. "They're pulling for him. They want him to be ready, all of Canada wants him to be ready. The whole country that follows hockey wants Connor McDavid to be ready."

Reached by phone at his hotel in Regina before official word of a time frame, Canadian world junior coach Benoit Groulx said it's too early to know about McDavid's status for that tournament. He said Hockey Canada would stay in touch with the Otters and continue to monitor the situation

"There is several weeks before world juniors, so it's too early to know," Groulx said. "We hope that he'll be able to be there, but I don't have that answer yet."

Groulx said this isn't the first time the program has dealt with an uncertain injury situation. At the Olympic level, Hockey Canada wasn't sure if Steven Stamkos would play in Sochi after he broke his leg a year to the day of McDavid's injury.

McDavid was set to play for Team OHL in Thursday's Super Series game against a Russian junior team in Peterborough, Ont., but was removed from the roster as expected. Him being able to play in the world junior tournament is the bigger question.

"Is this bad timing for Hockey Canada? It is," Groulx said. "We'll see how it plays out."

The day before a game in Buffalo, N.Y., last month, McDavid said he didn't consider himself a "lock" to make Canada's world junior team despite being a sure bet to go first in the draft and playing last year at the age of 16.

Bassin explained that at the time as an example of McDavid's humility. But he also wasn't buying it.

McDavid, who wears the "C" for Erie, is considered among the candidates to be Canada's captain.

The Newmarket, Ont., native leads the Ontario Hockey League with 16 goals and 35 assists in just 18 games this season. The Otters lead the Western Conference with a 16-1-1 record.

His injury ignited debate around hockey about whether star players should be fighting. This was officially McDavid's second fight of the season, though he did not throw any punches.

That's in line with Otters protocol for McDavid, which Bassin said in multiple radio interviews was for him to hug opposing players and wrap them up rather than throw punches.

"We didn't instruct him not to fight," Bassin said on the phone. "This is an action with a reaction."

Popular CBC personality Don Cherry, normally a fan of fights, said on Global News that "there's no way (McDavid) should've ever been fighting." He added that when he coached the Boston Bruins he wouldn't allow star defenceman Brad Park to drop the gloves.

Current Boston coach Claude Julien said McDavid would have been praised for fighting had he not been hurt.

"I don't think this is a guy that goes out and does it all the time," Julien said at the Bruins' morning skate before their game against the Toronto Maple Leafs. "Those things are going to happen, unfortunately. For a guy like him, he's trying to show that he'll do whatever it takes to be a help to his hockey club."

Leafs centre Nazem Kadri, himself a top prospect in the OHL a few years ago, knows what it's like to get targeted. He called McDavid's injury a "freak accident."

"Obviously it's unfortunate that that happened," Kadri said. "Good for him for standing up for himself. ... You don't like to see it, but there's that compete level, especially in every young star, that enough's enough and you're sick and tired of getting abused."

Leafs defenceman Morgan Rielly said the key was not to get caught up in fighting but that it's "what happens in hockey and you deal with it."

Bruins defenceman Dennis Seidenberg said it was up to McDavid to decide to fight.

McDavid's injury hurts the Otters in the immediate future and could put a dent in Canada's chances of ending its world-junior gold-medal drought. But Bruins forward Milan Lucic isn't worried about McDavid in the long term.

"To be perfectly honest I don't think it's really going to hurt his chances of going first or second in the draft," Lucic said. "He's got a long time still to recover and to get himself back to finish off the year."