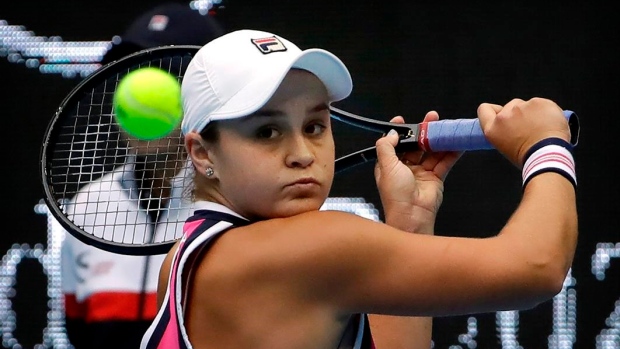 BEIJING — Top seeds Dominic Thiem and Ash Barty are through to the finals of the China Open in Beijing.

"I was disappointed to lose that set, but still I had the feeling that I'm not playing that bad. I just got a little more aggressive," said Thiem, who ousted Andy Murray in Friday's quarterfinals.

"I'm really proud that I was fighting like crazy through the whole match because Karen was playing exceptionally well today."

Barty advanced with a three-set victory over Kiki Bertens. The French Open champion traded breaks of serve in the third set before beating her Dutch opponent 6-3, 3-6, 7-6 (7).

"The quality from both of us was exceptional at times," said Barty, who credited new members of her backroom team and a better physical and mental outlook for the improvements she has made over the past 18 months.

"I'm pretty happy with the way I was able to fight and dig in," she added.

Fourth-ranked Osaka came up big when it mattered by converting three of her five breakpoints, while Wozniacki went 0 for 7.

"My serve is confusing to me," said Osaka, who eased to a 6-4, 6-2 victory and won 76 per cent of her first serve points to 58 per cent for the Dane. "The percentage is really low but when it goes in it's very helpful, I would say."

Osaka is in her second consecutive final after winning the title at the Toray Pan Pacific Open in her birthplace of Osaka, Japan.

She has said she hopes her performances on the Asian swing of the tour would dispel any doubts following what she described as a year that has been "very up and down."

"I feel like I'm still in a way the underdog, which I really love," Osaka said.