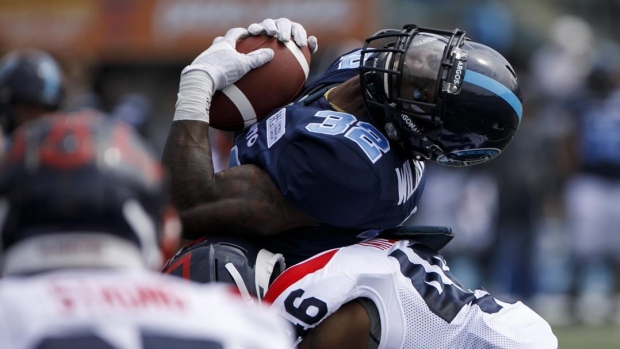 The Toronto running back can't wait to tangle with Lawrence on Saturday when the Argos host arch-rival Hamilton in their season opener. Lawrence will start at linebacker for the Tiger-Cats while he appeals a two-game suspension levied by the CFL on Monday for hitting Saskatchewan quarterback Zach Collaros in the head last week.

"But for me, selfishly, I'm happy he appealed it because we have the opportunity to play against them at their best. He makes their defence better and I want a piece of him."

However, it's not like Wilder. Jr. needs any extra incentive to get up for a game against the hated Ticats.

"It's no secret we don't really like them and they don't like us," Wilder. Jr. said. "It's a rivalry that goes way back and we want to continue it with another win."

The contest will be Corey Chamblin's first as Toronto's head coach. Chamblin served as the Argos defensive co-ordinator during their Grey Cup-winning 2017 season then returned to replace Marc Trestman, who was fired, in the off-season.

Chamblin, who has another Grey Cup ring as Saskatchewan's head coach in 2013, downplayed the significance of having to speak to Wilder Jr. to not let the Lawrence situation become a detriment.

"At the end of the day whether I talk to him or not, those guys are going to do it," he said. "They're tweeting and texting each other and that's part of the game.

In theory, the opening-week bye gave Chamblin and his coaches extra time to prepare for Hamilton. However, Chamblin said that wasn't the case.

"It has helped our team find itself, that's the biggest thing," he said. "We didn't put that time into Hamilton.

"We put it into ourselves as an extension to training camp to make sure we prepare our systems and give a greater understanding to our players of these systems."

James Franklin will start at quarterback for Toronto, making just second time since 2011 that veteran Ricky Ray won't be the Argos' season-opening starter. Ray, who retired in the off-season, will be in attendance Saturday and honoured prior to the kickoff.

"You've got a James Wilder who can run the ball," Chamblin said. "You have some receivers that you put (the ball) into their hands and let them make things happen.

"It's going to take all of us, the defence stepping up and doing its part, special teams giving a short field. That's no knock against James and his ability, that's just the way we have this team built to where it won't have to centre around one star . . . we'll build it together."

"Honestly, I'm trying to not think too much about it," Richards said. "I'm here for a reason.

"If you start thinking about things that could happen or who's in front of you, it can take you from your game and that's when mistakes can happen and things start going bad real fast."

Richards said while he's looking forward to his pro debut, he understands he could be battling nerves early on.

"It's my first CFL game, my first pro game so it probably will hit me a bit," he said. "I played in both pre-season games and even though that's not the real thing, I treated and prepared for them like they were and I was graded and judged in those games like I will be for this one.

"I'm trying my best not to over-think everything. I know the guys in front of me are there because they're good players but I also have confidence in myself. I'm going to play my game and try to stick to my game as much as possible."

SEASON OPENER: The Toronto Argonauts not only play their home opener but also the first regular-season game of the 2019 campaign. Hamilton comes in off a 23-17 home win over Saskatchewan last week.

NO TASKER: The Ticats will be minus veteran receiver Luke Tasker, who went on the six-game injured list this week. He had four catches for 30 yards against the Riders.

ARGOS DEBUT: Head coach Corey Chamblin makes his Toronto debut. He replaced Marc Trestman this off-season after serving as defensive co-ordinator in the club's 2017 Grey Cup-winning campaign. Chamblin, who won a Grey Cup in 2013 as Saskatchewan's head coach, has a 4-3 career record against Hamilton.