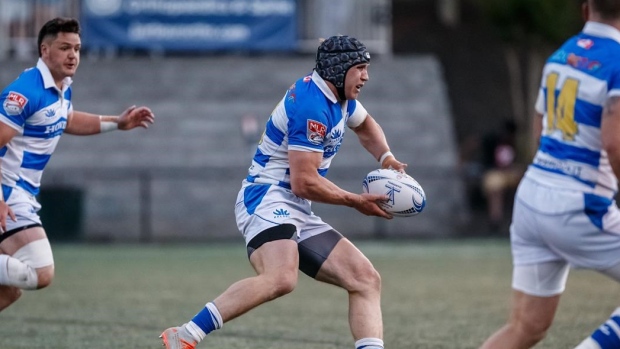 Andrew Quattrin, Guiseppe du Toit, Gaston Mieres and Matt Hood scored tries for Toronto, which erased an early 11-0 deficit to lead 16-11 at the break. Sam Malcolm booted a conversion and three penalties. The Arrows also got an automatic conversion for scoring under the posts.

The Free Jacks paid for some ill-discipline, conceding a string of penalties and shooting themselves in the foot with some handling errors. Toronto, meanwhile, played with plenty of purpose after going down early, knowing a loss would all but end their post-season aspirations.

New England rallied as the second half wore on, scoring a 63rd-minute try to cut the lead to 10 points. But the Toronto defence held and Hood added an insurance bonus-point fourth Arrows try, flying through the air to touch down in the corner with seven minutes remaining.

"The boys knew it was all on the line and the way they defended, the way they came off the line, it was a really pleasing performance to watch," said Arrows coach Peter Smith. "The players were outstanding today, all 23 of them.

"It was a tough scalp. New England's the No. 1 team in the competition but we showed we can match it with anyone on our day."

The Free Jacks' lone previous loss came Feb. 27 when it was beaten 19-15 on the road by the defending champion Los Angeles Giltinis.

The No. 1 seeds in the Eastern and Western Conference get a first-round playoff bye, awaiting the winner of the matchup between the No. 2 and No. 3 seeds in each conference. East-leading New England (12-2-0, 56 points) has already clinched a playoff spot but was looking to put further distance between it and No. 2 Rugby New York (9-4-0, 47 points) to secure the first-round bye.

The Arrows (8-6-0, 40 points) came into the game in fourth spot in the Eastern Conference, one place and seven points out of a playoff berth. They finished the night two points behind third-place Rugby ATL.

Rugby ATL plays at Rugby New York on Sunday. Toronto will be rooting for the New Yorkers.

Thursday’s game was the third in 12 days for the Arrows, with Smith making plenty of changes to the squad that thumped the expansion Dallas Jacks 57-0 last Saturday at York Lions Stadium.

Toronto fielded entirely new front and back rows with Cole Keith, Quattrin and Isaac Salmon slotting into the front row and Kyle Baillie, Ronan Foley and Lucas Rumball in the back row.

Captain Mike Sheppard, in the second row, and Malcolm, at fly half, returned to the starting 15 with Ueta Tufuga and du Toit, a late replacement for Richardson, starting in the centres.

The matchday 23 still featured 11 internationals: 10 from Canada and Mieres from Uruguay.

Both teams were missing players through suspension: James O'Neill for Toronto and Slade McDowall for the Free Jacks.

New England came out hard, leading 11-0 before the game was 13 minutes old on a pair of Poland penalty kicks and Sanerivi try at the back of a driving maul.

The Arrows answered in the 17th minute when, after kicking for the corner in the wake of a New England penalty, Quattrin broke a tackle and bulled over the try-line. The conversion cut the lead to 11-7.

Quattrin was sent to the sin-bin in the 20th minute, after video review, for a tackle without using his arms — a call that seemed harsh. Down a man, Toronto nevertheless moved ahead 13-11 with 26th- and 30th-minute Malcolm penalties.

Sanerivi was sin-binned in the 45th minute for making contact to the head in a tackle. Toronto kicked for touch off the ensuing penalty and du Toit cut through the defence to touch down under the posts in the 46th minute for a 23-11 lead.

After yet another New England penalty, Mieres twisted his body in the corner to stay out of touch and get the ball down for a try to pad the lead to 28-11.

The Free Jacks cut the lead to 28-18 in the 63rd minute with Newcomer crashing over after New England laid siege to the Toronto try-line.

The Arrows came into the contest 0-3-0 all time against the Free Jacks, including a 21-15 loss in snowy conditions March 12 in Quincy, Mass.

This report by The Canadian Press was first published May 19, 2022