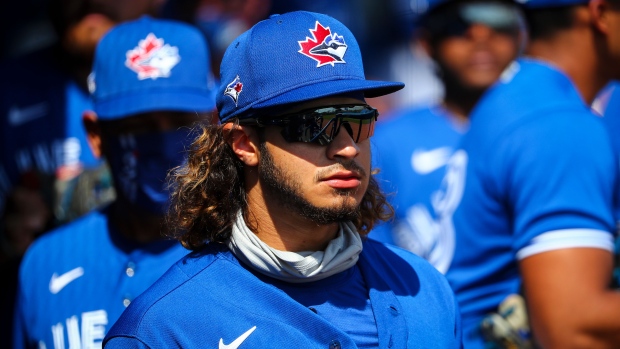 TORONTO — Two errors in a Grapefruit League game won’t change a thing about Austin Martin’s future, his high-end projection, or his confidence.

It does, however, provide a wee bit of evidence that the soon-to-be 22-year-old, despite his Vanderbilt pedigree and his advanced skillset in the batter’s box, still has some development ahead of him and that the Toronto Blue Jays are likely to take it slow with their 2020 fifth-overall pick.

It will only serve him — and the club — better in the long run.

The only way Martin is going to become an option in 2021 is if he completely forces the organization’s hand by proving he’s one of the best hitters in the minor leagues — a la Vladimir Guerrero Jr. circa 2018/19 — and even then, circumstances will have to align.

The odds of that happening are very low, but Martin is holding of all the cards in a sense so it’s impossible to completely rule out a special talent like him hitting a straight flush once minor league games finally begin.

But there’s no arguing he’s currently a man without a clear position.

I asked him Tuesday what position he thinks he’s going to play when he shows up in the big leagues someday.

“That’s a good question,” Martin said after taking a second to think. “I don’t know. Every time I’m asked that question, my answer now is I’m a shortstop until told otherwise. I mean, yes, I’m going to continue to bounce around and take reps everywhere else, but as of right now I’m a shortstop.

“I think versatility is a key aspect of my game and it’s part of my identity as a baseball player. If I can keep jumping around and keep myself flexible, that’s not only a benefit for myself but for the Blue Jays and this entire organization as a whole.”

Drafted in the most unique circumstances you could ever imagine in the middle of a pandemic, Martin has yet to play a minor-league game, and even he noted that Monday’s appearance against the Pittsburgh Pirates at TD Ballpark in Dunedin was the first time he’s played, technically, since last March.

“It just good to get back on the dirt, knock some of the dust off and get back to playing ball again,” Martin said.

A day later, he appeared in centre field.

Interestingly enough, those are the two positions he’s least likely to play in the majors.

The most realistic options are second base, third base and left field, with the latter two positions being spots Martin worked at immediately during summer camp in Toronto last year.

In the end, it could be all three — or maybe even all five at times — with the Blue Jays’ desire to develop versatile chess pieces who can move around to different positions, switch gloves capably, and do what matters most — hit and provide offensive production.

In Cavan Biggio, there’s an ear to bend this spring in camp about how to divide his time and learn multiple positions in the minors, something he may have to continue to do in the big leagues.

“Cavan, yeah, we had literally a conversation I want to say two days ago,” Martin said. “It was brief, but he asked me, ‘Where do you want to play?’ I told him, ‘I’m a ballplayer, just put me on the field. Put me in the lineup and just put me on the field.’ We kind of share that similar mindset. He just encouraged me to continue to work on that, stay on that path of staying versatile because he understands how his role on the team has helped, just because he’s able to bounce around to those positions, so he’s kind of sharing that information with me, as well.”

Make no mistake, Martin can hit.

The approach at the plate in Rochester at the alternate site was as advanced as many thought it would be when he was labelled the consensus second best hitter in the draft last June, something he has shown in his super small sampling of Grapefruit League at-bats thus far.

“I’m the same hitter (as I was in college) so if I get a pitch that I like I’m going to swing,” Martin said of his approach against more advanced pitching, noting that he’s seen a veteran plan of attack from the arms he’s faced. “If not, then I’m not (going to swing). I just try to keep it as simple as I possibly can right now. If it’s necessary that I work the count, then I’ll work the count. But if I get a pitch early that I can drive, I’m going to try to drive it.”

It’s not a complete profile as of yet, though.

There are still questions about how much power will develop in the pros, and the DeLand, Fla., native, has already made some adjustments in the box over the past year, changing his hand position in order to help his swing path.

He’s also hit the weight room in an effort to hit the ball harder.

“Yeah, definitely,” Martin said when asked if the idea is to add a bit more pop. “This off-season I focused on my body, my physicality, trying to get bigger, trying to get stronger. Yeah, I made some tweaks in my swing, but I think everything as a whole when it came to my weightlifting program as well as working on those little small mechanical adjustments has shown that the numbers are starting to climb a little bit in terms of exit velocity. It’s good to see that the work you’re putting in is starting to pay off.”

Martin is a smart, talented hitter and one of the best prospects in baseball, but he’s still very likely going to be a prospect at this time next year, too.

Then the conversation of when he will arrive can really start.​