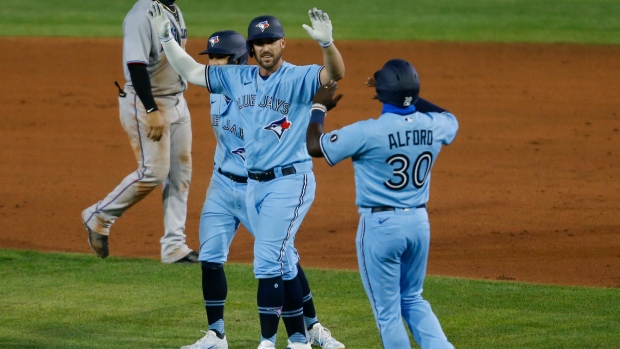 The Toronto Blue Jays are finally home. Well, sort of. They're in Buffalo - close enough. It is their home away from home for the remainder of the 2020 Major League Baseball season.

The Blue Jays organization did an amazing job making Sahlen Field, the minor league stadium that's normally home to the Buffalo Bisons, Toronto's Triple-A affiliate, feel as major league as possible. The transformation in the stadium has been remarkable.

Sahlen Field is familiar to many of the Jays players as they have passed through Buffalo as they work their way up the organization. But it is hardly recognizable these days with the blue walls, Jays logos, dugouts and MLB standard lighting installed in the ballpark. The clubhouses have been reconstructed to honour social distancing and have been branded to represent the organization. The Jays are using the third-base dugout as they do in Toronto whereas the Bisons have always used the first-base dugout as their home base.

The club's entire weight room was shipped across the border and reconstructed to give the Blue Jays every chance to maximize performance. The team's front office even made sure that manager Charlie Montoyo’s office closely resembles his office in Toronto, including his drums and family pictures.

This kind of effort made by an organization on behalf of its players and staff makes a lasting impression on a team. It pulls the players and coaches and the front office together in a way that says, “we are one.”

Team president Mark Shapiro and general manager Ross Atkins could have settled on making the stadium just a place where they would play 27 home games this season. But instead, they made it 'home.' They went above and beyond in a way that exceeded expectations. What they did is special.

Finally having a place to call home will make a big difference for the Jays. It will make them stronger physically. They have been living out of their suitcases and travelling every three or four days to a new MLB city.  Now, they can sleep in the same bed for nine or 10 days at a time and get their rest. Emotionally, it will provide them with stability to be able to call someplace home. Mentally, they can now have a routine to better prepare for the day’s work.

It is not a surprise to me that the Toronto offence has come back to life the last couple of days. The team that averaged just three runs per game over the first 13 games of the season has scored a combined 16 runs in their two home games in Buffalo. Home has given them a needed boost. It feels like the Blue Jays season has just started now.

Now that the Jays have a home, I expect that Montoyo will bring his young team out for some early work on fundamentals. When a team is on the road as much as the Jays have been all season long, they don’t get access to a field for extra work.

The Jays need to have a refresher course on base running, bunt defences and overall situational play. If they are going to be a playoff team, they need to tighten things up a bit. They won’t get to October baseball if they keep botching bunt defences and making three errors like they did on Wednesday night against the Miami Marlins.

It will be the little things that make the big difference. When they were on the road during the last few weeks they have only been able to focus on big things and it is understandable. But if this young club is going to make the transition from a good little team to a playoff team, they are going to have to make plays to improve run production and prevention.

There's a problem in the National League right now. The St Louis Cardinals have played just five games in the first three weeks of this 60-game season because of 18 positive (10 players and 8 staff members) coronavirus tests. The unhealthy players and staff are under quarantine while the healthy players continue to be tested until they are cleared to return to the field as a team. The healthy players have been extremely limited in their workouts to stay fit and healthy.

If the Cardinals are going to play all 60 games they would have to play 55 games in 44 days. That is impossible, considering the overwhelming scheduling difficulties and health risk involved. The risk of injuries to players would be profound.

The good news is that the Cardinals outbreak happened early enough in the season that there is time to make up some (but not all) of the games. The later we get in the season, the less time there will be to make up lost games for any team. This will likely not be an issue that's exclusive to St Louis.

Commissioner Rob Manfred has already suggested using winning percentage, as opposed to wins and losses, to determine the 16 playoff slots. But there will have to be some minimum number of games that a team has to play in order to qualify for October baseball. It wouldn’t be fair for the Cardinals to win their division while only playing 45 games and beating out a Cubs team that plays all 60 games. A lot can happen in that 20 per cent of the season that the Cardinals wouldn’t play.

Of course, it would disincentivize a team that knows they aren’t going to be able to get to the 40-game threshold. But the reality is that any team that suffers a coronavirus outbreak of such a magnitude to lose 20 games in their season must have violated the league's health and safety protocols. They must accept responsibility for the position they are in.

- Current New York Mets pitcher and former Blue Jay Marcus Stroman opted out of the season this week because of COVID-19 concerns. Stroman tore a calf muscle during summer camp while preparing for the season. He had been rehabbing and was healthy enough to throw an 80-pitch simulated game last Sunday. He was also close to being activated from the injured list. Of note, he had just earned the service time he needed to qualify for free agency at the end of the season. He was able to hang in there long enough to get the service time he required, but he felt the risk moving forward was too much for him. Stroman is not alone in his decision as others have done the same and certainly I can respect his desire to protect family members who are more high-risk. It will be interesting to see how Stroman's decision impacts his free-agent value. It is not a particularly strong class of free agent pitchers. He will certainly be among the upper level of the group as he's coming off of a strong 2019 season and a calf injury isn’t as concerning as an arm injury. He's 29 and has a couple of 200-inning seasons under his belt. Stroman has performed well in big games, including the postseason. I suspect there will be interest in him at the three-year, $50 million range.

- Charlie Montoyo gets criticized by fans about some of his decisions regarding bullpen usage and lineups. It comes with the territory.  One thing to remember is that he is managing a club still in the process of rebuilding while trying to win now. His roster isn’t quite where it needs to be to fit every situation necessary to win games. It doesn’t mean that the Jays can’t get hot and win enough games this season to qualify for the postseason. But a lot is going to have to go right, including some players being given roles they aren’t quite qualified for and getting the job done through elevated performance or good fortune.

- The shortened season can certainly present some surprises because teams with less talent can beat better teams because they get hot at the right time. As it stands today, the Miami Marlins, San Diego Padres, Detroit Tigers and Baltimore Orioles would all be playoff teams. They were all last-place teams in their respective divisions in 2019. The Marlins have overcome a COVID-19 outbreak and a decimated roster to find themselves atop the NL East. It's a remarkable story. But it won’t last. In fact, of the four teams listed above I  believe only the Padres will make the playoffs this year. I fully expect Miami, Baltimore and Detroit to fade over the next few weeks and finish in last place.

- For the first time in a long time, we could have a batter hit .400 this season. Not since Ted Williams hit .406 in 1941 has it happened. There are currently three players performing at that level: Colorado Rockies outfielder Charlie Blackmon (.472), San Francisco Giants second baseman Donovan Solano (.458) and New York Yankees second baseman DJ LeMahieu (.431). Williams played 143 of 152  games that season which is a much tougher task than hitting .400 over a 60-game season. But it will still be exciting to watch these three hitters chase the number all season long. I think Blackmon has the best chance to do it. He plays in Colorado and is positioned in the lineup between two elite-level hitters in shortstop Trevor Story and third baseman Nolan Arenado. He will get plenty of good pitches to hit.