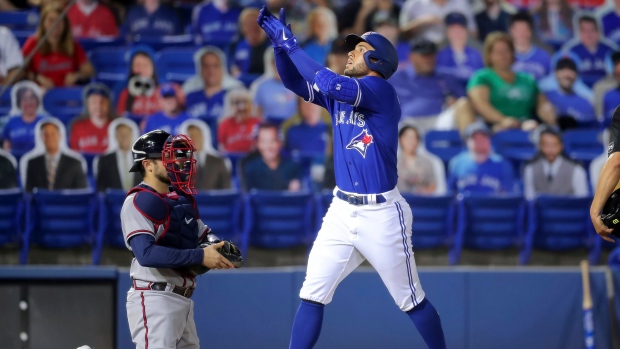 Toronto Blue Jays general manager Ross Atkins provided injury updates on a number of players Thursday, saying outfielder George Springer is feeling better but will likely be out past the minimum of 10 days on the injured list. On Wednesday the Blue Jays placed Springer on the 10-day IL, retroactive to Monday.

#BlueJays GM Ross Atkins spoke just now. Some notes:
-Springer feeling better but likely out past minimum.
-Alejandro Kirk out 4 weeks and “could be longer.”
-David Phelps (shoulder) likely heading to IL.
-Atkins called Nate Pearson a “candidate” to join rotation but no plan yet.

Springer appeared in just four games for the Blue Jays this season before aggravating his quad injury. In 15 at bats the 31-year-old had two home runs and three RBIs.

In other injury news, Atkins said catcher Alejandro Kirk is out four weeks and it could be longer. Relief pitcher David Phelps was placed on the injured list with a right lat strain.

Atkins also said Nate Pearson is a candidate to join the Jays' rotation but there is no plan yet. The 24-year-old started the Buffalo Bisons season-opener in AAA, striking out eight batters in 3.2 innings.