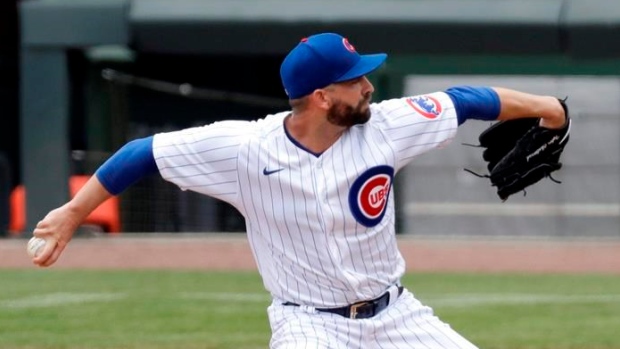 The Toronto Blue Jays have agreed to a deal with free agent pitcher Tyler Chatwood.  He appeared in five games, all starts, last season for the Chicago Cubs and posted a 2-2 record with a 5.30 ERA in 18.2 innings.

#BlueJays and Tyler Chatwood have agreed to a one-year deal, per source. @JonHeyman first on the deal.

Jays had interest in the now-31-year-old in Dec. 2017 before he agreed to 3/$38M deal with the Cubs, a contract that did not go well.
Versatile arm provides staff depth.

After exiting an Aug. 30 start, he was forced to the injured list with a forearm strain that would eventually cost him the remainder of the season.

The 31-year-old spent the last three seasons with the Cubs and has also pitched for the Colorado Rockies and Los Angeles Angels.

Chatwood has some intriguing elements, generating whiffs with crazy spin rates — 96th percentile for both heater and hook.
The issue?
Can’t find the plate most nights, evidenced by a 4.7 BB/9, and gets touched up when he does.
Maybe Pete Walker can find a fix.