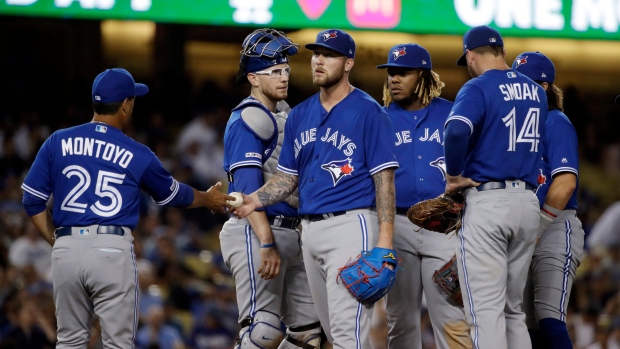 The Toronto Blue Jays have sent right-hander Sean Reid-Foley down to triple-A Buffalo after his shaky outing Tuesday night where he struggled against the Los Angeles Dodgers.

Rule 5 selection - LHP Travis Bergen - has been returned from the @SFGiants and will report to the @BuffaloBisons.

Additionally, RHP Jason Adam has been recalled and RHP Sean Reid-Foley has been optioned to Triple-A. pic.twitter.com/Boj7EbomAJ

As a corresponding move, right-handed reliever Jason Adam is joining the Jays in Los Angeles.

Reid-Foley surrendered five earned runs in 1.2 innings of work after entering the game in the second inning in relief of Buddy Boshers. Reid-Foley gave up five hits and two walks over the course of 51 pitches, often times struggling with control.

Reid-Foley was pitching well up until his last three starts, sporting a 2.36 ERA from the start of the season to Aug. 9. But it's been a different story lately as the 23-year-old has surrendered eight runs over his last five innings pitched. For the season, Reid-Foley is 2-4 with an ERA of 4.26.

Adam is 1-0 with an ERA of 1.29 in seven innings pitched with the Jays so far this year.

Meanwhile, left-hander Travis Bergen has been returned to the Blue Jays' organization after he was selected by the San Francisco Giants in last year's Rule 5 Draft. Toronto announced he will be assigned to triple-A Buffalo.

The Jays will continue their series at Dodger Stadium Wednesday night before heading to T-Mobile Park to take on the Seattle Mariners Friday night.