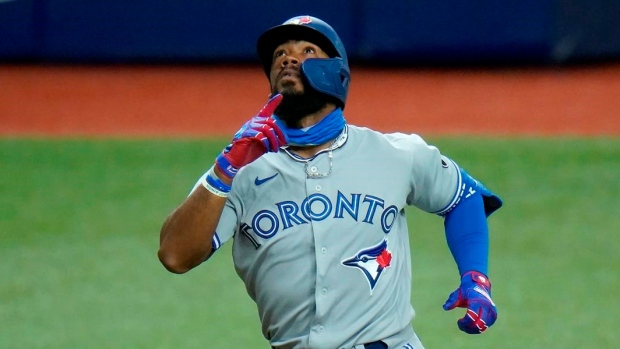 The Toronto Blue Jays and outfielder Teoscar Hernandez have settled at $4.325 million ahead of arbitration, it was announced Friday.

After a couple of up and downs seasons to begin his Blue Jays career, Hernandez broke out in a big way last season, hitting 16 home runs and driving in 34 runs over the course of 50 games to finish 11th in American League MVP voting.

He also posted a career-best OPS of .919, well above his .774 average over his first two full seasons as a member of the Jays. Prior to his time in Toronto, the Cotui, Domincan Republic native spent time with the Houston Astros.

But that wasn't the only move the Jays made on Friday.

The team also announced they have settled at $3 million with right-hander Ross Stripling prior to arbitration.

He was acquired by the Jays at last summer's trade deadline in exchange for a player to be named later that turned out to be pitcher Kendall Williams. The 31-year-old Stripling pitched to an ERA of 5.84 in 12 games combined between L.A. and Toronto in 2020.