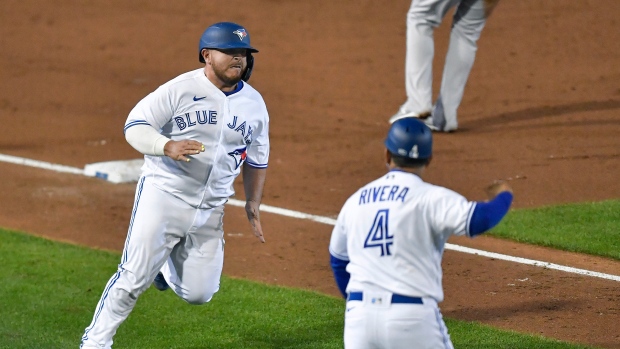 TORONTO — Improbable but not impossible.

That would be the best way to describe the Toronto Blue Jays’ postseason outlook back in July, when summer camp rebooted and the playoff field was expanded to eight American League teams shortly thereafter.

Now, on the verge of clinching one of those eight spots, improbable but not impossible turns into a good way to describe the club’s chances of getting out of the first round, a three-game roll of the dice that, as of today, would happen to see them face the top-seeded, division-rival Tampa Bay Rays on the road in Florida.

Despite an up-and-down month of September — the downs were really down in 18-1, 20-6 and 13-2 defeats — the Jays have whittled their magic number down to three. FanGraphs’ playoff projection has them with a 99.2 per cent chance to be playing October baseball for the first time since 2016, which will technically start on Sept. 29.

From the day he addressed the media for the first time way back in February in Dunedin, Bo Bichette has been telling everyone that this is where they expected to be.

The 22-year-old feels they’ve even disappointed in a way.

“We’ve played really well, but I think we could’ve played better,” Bichette said. “I’m proud of the way we’ve battled this year under a lot of difficult circumstances, but this last week we’re just going to try to get a playoff spot. Like I’ve told you all along, we expected to be here.

“Externally, yeah, I think everybody is surprised that we’re in the position we are. Internally, like I said, we’re not surprised at all. We’re kind of where we expected to be, maybe even a little bit under it.”

With a group of teams led by the Seattle Mariners just hanging on to their respective playoff hopes behind the Jays, it’s only a matter of time before Bichette & Co. are able to clinch.

Right now, it’s all about fine-tuning and making sure they’re ready to peak next week.

Over the past two months, this team’s deficiencies have become clear.

From bad base running to subpar defence, Bichette knows that can’t happen starting next week.

“To win big ballgames, it’s got to be everything,” Bichette said. “We’re just going to continue to focus on getting better in every aspect, and I think we have been.”

One development to watch this week is how manager Charlie Montoyo lines up his rotation.

Thursday’s starter is fully expected to be ace lefty Hyun-Jin Ryu, who would then be on track to pitch Tuesday in Game 1 of the first round.

The arms that follow on Friday and Saturday would then be lined up to pitch in Games 2 and 3 on Wednesday and Thursday, but those games will have an all-hands-on-deck postseason feel to them.

Past Ryu, the leashes will be extremely short.

With the way he threw Sunday in a win over the Philadelphia Phillies, Taijuan Walker should follow Ryu, while veteran Matt Shoemaker put himself in the Game 3 conversation on Monday when he returned from a lat strain — his first outing since Aug. 21 — to throw 54 pitches, and looked good in doing so.

Shoemaker has one postseason start on his resume, an outing in the ALDS back in 2014 that saw the then-27-year-old spin six brilliant innings, allowing just one unearned run.

Walker’s October resume isn’t as pretty. He allowed four earned runs in an inning of work in the NLDS in 2017 as a 24-year-old.

That history matters little, but outside of Ryu there simply aren’t many track records for Montoyo to turn to next week.

“My mindset is I always want to get out there and I want the ball,” said Shoemaker, who will likely get to about 70 pitches in his final regular-season tune-up. “I want to start; I want the ball. Just go out there and make quality pitches and give this team a chance to win every time I’m out there. I haven’t talked about [a postseason start] yet, haven’t discussed that with anyone, just take it one day at a time.”

Aside from how the pitching staff will be shaped, another roster development over the past two weeks is the emergence of 21-year-old catcher Alejandro Kirk and the obvious juice his bat brings to the bottom of the lineup, evidenced by his breakout 4-for-4 game Monday night.

While the Jays have been pleased with his defence, Danny Jansen is the superior defender and game-caller, leaving Montoyo with a decision to make and a tradeoff to accept.

“Every time I’ve seen this kid, his approach at the plate has been amazing,” Montoyo said. “And facing guys he’s never seen, that’s even more impressive to me. But it’s all about his approach. He doesn’t chase many bad pitches and he’s always looking for his pitch to hit.

Like life in general in the middle of a pandemic, nothing about this Blue Jays’ season has been perfect, but most of it becomes easy to accept because of the position they’re in.

Are they fortunate the postseason was expanded, giving middling teams a chance? Of course.

Does the rotation need to get much, much better moving forward? Without a doubt.

Do the youthful mistakes in the field and on the bases need to stop to beat the best teams at critical times? You bet.

But an unpredictable 60-game sprint playing home games in a minor-league ballpark has left them a win or two away from being included in a unique postseason tournament that Cavan Biggio likened to March Madness way back in July.

No matter what lens this season is viewed through, the Blue Jays are a better team in a better position than they were a year ago.

Improbable but not impossible.​