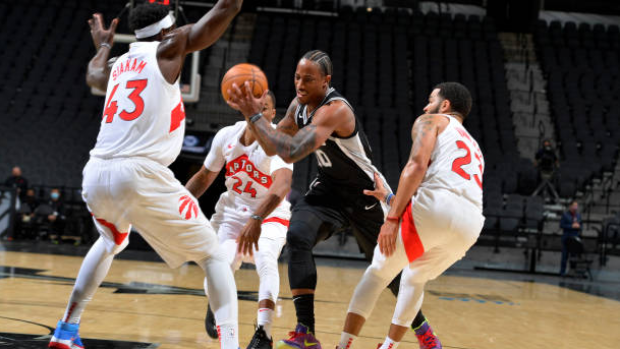 The struggling Toronto Raptors will look to end a two-game losing skid and three-game home slide on Wednesday against DeMar DeRozan and the San Antonio Spurs.

The Raptors lost further ground in the race for the final play-in spot with Tuesday's 108-103 loss to the Atlanta Hawks and now sit a full two games back of the Chicago Bulls for 10th in the Eastern Conference.

Toronto could lean more on Malachi Flynn against the Spurs after the rookie posted a career-high 22 points in Tuesday's loss.

“Tonight he was pretty much our offence down the stretch,” Raptors coach Nick Nurse said of Flynn after the defeat.

The 22-year-old, who is averaging just 5.1 points on the season has now scored at least 20 in two of his past three games.

The Raptors will once again be without Kyle Lowry, Gary Trent Jr. and Fred VanVleet, who will be serving his suspension on Wednesday.

The Raptors have gone 11-15 at home. Toronto ranks eighth in the Eastern Conference at limiting opponent scoring, giving up just 111.6 points while holding opponents to 45.8% shooting.

The Spurs, who sit ninth in the Western Conference, have gone 14-9 away from home. San Antonio gives up 111.9 points to opponents and has been outscored by 1.2 points per game.

The teams square off for the second time this season. The Spurs won the last meeting 119-114 on Dec. 26. DeRozan scored 27 points to help lead San Antonio to the win.

DeRozan leads the Spurs averaging 21.2 points and is adding 4.3 rebounds. Derrick White is averaging 18 points and 3.1 rebounds while shooting 43.4% over the last 10 games for San Antonio.