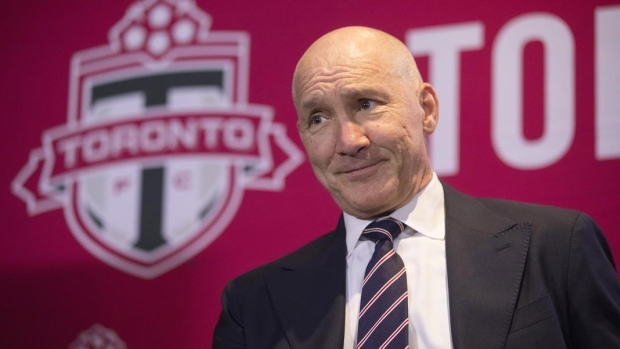 On Thursday, that shared goal turned into a five-year contract extension that will carry Manning, president of Toronto FC and the Argonauts, through the 2025 Major League Soccer and Canadian Football League seasons.

"I like stability. And I think it's very important in championship DNA," Manning told The Canadian Press on Thursday.

"It was easy because both of us wanted a long-term deal … It was a win-win for both parties, I believe."

Manning joined MLSE as TFC president in October 2015. He added the title of Argonauts president in January 2018 when MLSE acquired the CFL franchise.

TFC was still very much a work in progress when Manning came on board. He had been on the job less than three weeks when he saw the club thumped 3-0 in Montreal in Toronto's first-ever playoff appearance.

Times have changed. TFC has filled its trophy case since, highlighted by the treble in 2017 when the club won the MLS Cup, Supporters' Shield and Canadian Championship.

"It's something we can be proud of," Manning said Thursday of the franchise's turnaround from doormat to perennial contender. "I still think we've got a lot more trophies in front of us."

"I think Greg deserves the opportunity to continue what they've started here," Manning said at the time, while acknowledging he had thought hard about the coaching position.

Turning the Argonauts around has been more difficult, on and off the field. Head coaches Marc Trestman and Corey Chamblin and GM Jim Popp were axed on Manning's watch with the team enduring 4-14-0 seasons in both 2018 and '19.

The 2020 CFL season was cancelled due to the pandemic and the league is now exploring possible options with the XFL.

Manning has his hand-picked lieutenants in place with the Argos with franchise icon Michael (Pinball) Clemons as GM and Ryan Dinwiddie as head coach.

While Manning spent 2004 to 2008 with the NFL's Philadelphia Eagles, as vice president of sales and service (in charge of corporate partnerships and premium seating), he says he relies on the football knowledge of Clemons and Dinwiddie.

"I'm really looking forward to how this comes together. But you've seen we've had a good off-season in terms of player acquisition, to kind of turn around this roster," said Manning. "And I'm really excited with these two guys in charge here

Manning says he expects the CFL to play in 2021.

"Our intention is to play. It's in our best interest to play," he said. "The big question is (will it be) with fans? That is very very important to the CFL in terms of our own business.

"I think we've seen a lot of positive signs now lately, in the last month or so with where we are on the pandemic. And I just hope we'll be able to play and we're be able to play with fans in our buildings."

Manning's existing deal expired at the end of 2020.

"We had pretty much come to an agreement in principle at the end of last year," he said, adding he wanted to get the future of other people like Curtis sorted first.

"It was important that I had the right structure here," he added.

MLSE was happy to oblige, it seems.

“Bill has brought invaluable experience to MLSE as president of TFC and the Argos, but more importantly, he has had an important hand in creating a company culture focused on winning and giving back to our community,” Tanenbaum said in a statement Thursday.

“As president of Toronto FC and the Argonauts, Bill’s wealth of experience and many accomplishments have helped shape our leagues for the better and his impact within our company is just as important," added MLSE president and CEO Michael Friisdahl.

Manning is a two-time MLS Executive of the Year, earning the honour in 2012 and '14 during his time with Real Salt Lake.

Manning got his start in MLS in 2000 as president and GM of the Tampa Bay Mutiny.

He went on to work for the NBA's Houston Rockets (2003-04) and NFL's Eagles (2004-08). He became president of Real Salt Lake and Rio Tinto Stadium in 2008, leaving the club in August 2015 in what was described as a mutual parting of the ways as part of a front-office restructuring.

A native of Massapequa, N.Y., Manning earned first-team All-America honours as a senior at the University of Bridgeport. He played professionally in the United Soccer League (USL) with the Penn-Jersey Spirit (1991), the Valley Golden Eagles (1993) and New York Fever (1994-95) before moving into front-office roles with the Long Island Rough Riders and Minnesota Thunder, in the USL.

This report by The Canadian Press was first published March 18, 2021