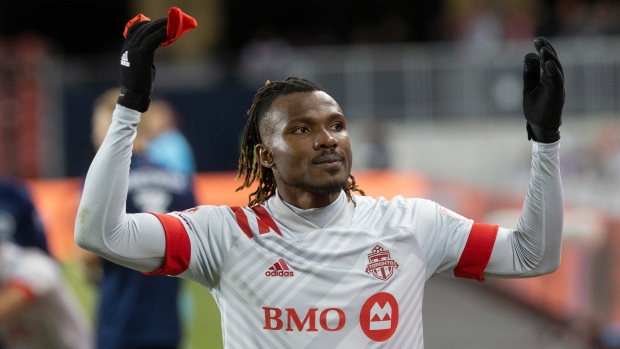 The 22-year-old from Nigeria tore the anterior cruciate ligament in his left knee in training Friday at BMO Field when he became tangled with defender Omar Gonzalez, who has seven inches and 45 pounds on him, while both attempted to get to a cross.

"It was one of the last plays of the day, unfortunately," said Toronto coach Greg Vanney.

Achara is scheduled to undergo surgery next Tuesday. He will miss the rest of the season, whatever that is after the MLS is Back Tournament which runs July 8 to Aug. 11 in Florida.

Vanney said the young forward had wasted little time proving he was "goal-dangerous in every game."

"If he wasn't in the lineup, he was going to be one of the first guys to come into a game," Vanney told a media conference call.

Vanney said he had hoped to build Achara's versatility — he can play striker or wide — into the team toolbox.

"We were starting to embark on all the different ways we can use this guy in different roles," he said.

"For me, in terms of my planning he was a really important piece of how we would evolve ... Every challenge we put in front of him, he met with real quality."

"So we'll miss him. Somebody's now going to have to fill some of those roles. He's done everything that one man could possibly do to prove his value in the amount of time that he's had."

Achara, whose career at Georgetown University was interrupted by injury, was selected in the first round (25th overall) of the Jan. 9 MLS SuperDraft.

Despite missing the first part of training camp due to illness, he was rewarded with a contract Feb. 21 after scoring three goals in pre-season.

"Ready to pour my heart out for this team that gave me everything. Thrilled and super excited for this opportunity!! Let’s get to work #God'sPlan," he tweeted at the time.

Unable to take part in Toronto's Feb. 29 season opener in San Jose because of red tape, he scored in his MLS debut the next week. After an apparent 11th-minute goal was waved off for offside, Achara scored in the 81st minute for a 1-0 Toronto win March 7.

Five days later, the league shut down due to the global pandemic and Achara found himself in lockdown in a high-rise near the team's north Toronto training facility.

He looked to make the best of the situation. He was featured in a Toronto FC workout video, hefting cans of tomatoes as makeshift weights.

Star striker Jozy Altidore took to social media Thursday to voice his support for Achara, saying "2020 has been a tough one. Hope for a full and speedy recovery for the young buck."

Ifunanyachi came to the U.S. at 16 to attend Berkshire High School in Massachusetts, where he spent a year playing with TFC winger Jacob Shaffelburg.

As a freshman at Georgetown in 2016, he sprained the lateral collateral ligament in his right knee and played just eight games with one goal. The next season, he sprained the ligament again with seven goals and one assist in 11 games.

He was injury-free as a junior and ranked third on the team in scoring with seven goals (including four game-winners) and one assist in 21 games. He was hurt again playing for his Black Rock FC club team prior to his senior season, with a sprained left meniscus requiring surgery.

The Hoyas co-captain missed the start of the 2019 season but came back strong with six goals and five assists in 15 games, only to sprain his ankle in the NCAA playoffs. He saw limited action after that but came off the bench in the Hoyas' 7-6 penalty shootout win over Virginia in the College Cup final in December.

Toronto is slated to leave Friday for Florida and the MLS is Back Tournament. It opens July 10 against D.C. United before facing the Montreal Impact on July 15 and the New England Revolution on July 21.

All the games are taking place at Disney's Wide World of Sports complex in the Orlando area.