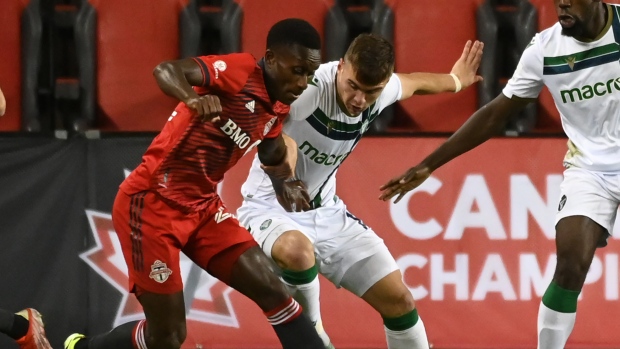 TORONTO — On a miserable rain-drenched night when scuba gear was probably the most appropriate dress, Toronto FC's quality shone through.

Fielding arguably its strongest available team, Toronto put the Canadian Premier League side under pressure before a sparse crowd at BMO Field. York spent much of the game on the back foot and trailed 2-0 after a first half that saw it outshot 9-2 (6-1 in shots on target).

Goals in the 84th and 89th minute skewed the score but Toronto was full value for the win before an announced crowd of 3,651.

"The effort, the intensity, the mentality of the team was there tonight, like I think you've seen in the past few games," said the Spaniard. "A really good performance. I think the team starts to click.

"It's been a difficult season for us and we need it," he added.

Hamilton's Forge FC was the first team to reach the semifinals, defeating Winnipeg's Valour FC 2-1 on Sept. 15. The CPL champion will host CF Montreal, which downed HFX Wanderers FC 3-1 on 89th- and 92nd-minute goals by substitute Ballou Tabla in a game earlier Wednesday at Wanderers Ground.

Toronto, last in MLS at 4-15-6, was coming off a 2-1 win over Nashville SC that snapped a six-game losing streak and nine-game winless run (0-7-2). Seventeen points out of the playoffs with nine games remaining, Toronto targeted the Canadian Championship looking for something to celebrate in a nightmare season.

Canada soccer was probably the big winner on the night.

Osorio, Jacob Shaffelburg and Richea Laryea -- TFC's trio of Canadians in the starting lineup -- combined on the first goal. Canadians Jahkeele Marshall-Rutty and Okello made their mark off the bench.

And York fielded a starting 11 with 10 Canadians.

"These are experiences that these players are going to take and get better from," said Osorio.

The MLS side went ahead in the 34th minute after Laryea and Shaffelburg combined down the left flank with Shaffelburg's cross finding a wide-open Osorio between the York centre backs. His header beat exposed York 'keeper Ingham.

Osorio, playing in his franchise-leading 282nd game, has now scored against 24 different teams in all competitions for Toronto.

Seven minutes later, Laryea and Shaffelburg played providers again after a York turnover. This time Shaffelburg's low curling cross found Achara as he broke through the centre backs and the Nigerian-born forward poked the ball past Ingham.

Soteldo scored from the penalty spot in the 84th minute after York captain Roger Thompson took down the 17-year-old Marshall-Rutty in front of the south stand. The 21-year-old Okello, put in alone by Michael Bradley, made it 4-0 in the 89th minute.

It was a learning experience for the young York side.

"I don't know if the occasion got the better of some of the guys but certainly I hope we all learn a lesson from it and walk away and go 'OK you know what? If we put in our best 90, I think it's a real game. I think we can steal something from it,'" said Ingham, who had a fine game despite the score.

"But instead we came out and we weren't at our best. That may be a little bit of credit to TFC but also it wasn't our best day."

Head coach Jim Brennan lamented his defence on the first two goals but saw positives on the night.

"Does the scoreline justify our play and the way the match was? I don't think so. Not at all ," he said.

It was the first clean sheet for Toronto since a 2-0 MLS win over Columbus on May 12. TFC has given up an MLS-worst 51 goals this season.

Montreal is the defending Canadian champion, having beaten Toronto via penalty shootout in the tournament final in 2019. The 2020 tournament was essentially shelved by the pandemic although Toronto and Forge are slated to meet later this year for bragging rights and the trophy in a one-off final.

Wednesday's game was a homecoming for Brennan, who was Toronto FC's first-ever signing and captain. The Canada Soccer Hall of Famer went on to serve as an assistant coach and assistant GM with the MLS club.

Brennan, now 44, played 84 league games for Toronto from 2007 to 2010 before retiring. He won the Canadian Championship as a player in 2009 and his name appears on Toronto's Wall of Honour outside the stadium,

Perez made two changes from the team that beat Nashville, restoring starters Chris Mavinga and Soteldo at the expense of defender Eriq Zavaleta and forward Dom Dwyer.

TFC is a seven-time winner of the Voyageurs Cup, which goes to the Canadian Championship winner along with US$75,000.

Toronto got a bye to the quarterfinal while York defeated League 1 Ontario's Master's FA 5-0 in preliminary-round play.

It marked TFC's first-ever meeting with a CPL side. The MLS team has played FC Edmonton, then with the NASL, and the now-defunct Ottawa Fury, of the USL, in past Canadian Championship matches.

While the two teams play just 30 minutes apart, TFC at BMO Field and York at York Lions Stadium, there is a financial chasm between the two.

Toronto has at least six players — Mavinga, Osorio, Bradley, Jozy Altidore, Omar Gonzalez and Alejandro Pozuelo (not to mention Soteldo, whose salary has not been released by the MLS Players Association because of his arrival time this season) — who individually make more than that CPL player budget.

The salaries of Toronto's starting 11 totalled more than US$6.18 million, not counting Soteldo's unreported pay. It would have far been more had fellow designated players Altidore (US$3.6 million) and Pozuelo (US$4.69 million) had been healthy.

This report by The Canadian Press was first published Sept. 22, 2021