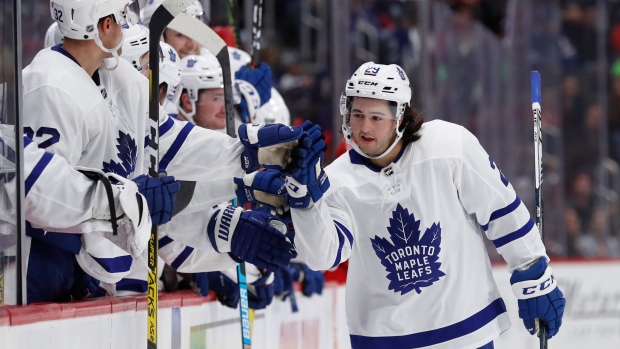 On a night where Toronto iced mostly an AHL lineup, it was Rasmus Sandin who took advantage of the opportunity.

Sandin led all skaters with 30:35 minutes of ice time, he had three hits, two blocked shots and one shot on goal.

The Swedish defenceman caught the eye of Leafs head coach Mike Babcock who after the game he told the media, “I thought Sandman was really solid, one of the best players in the game for sure. Played real hard, real smart, just makes good plays.”

“Good opportunity for him to be important, and he was,” Babcock added. “Did a good job."

Despite Sandin being just 19, Babcock doesn’t think the blueliner's age will factor into the final roster decision.

“It doesn't appear to me [age] seems to be a problem,” added Babcock. “He seems to be ready."

Playing alongside Sandin on the blueline was Martin Marincin – the 27-year-old defenceman logged 26:11 minutes and, after struggling with his confidence in the past, is doing better this pre-season.

"I'm feeling best since I'm here so just want to keep doing what I'm doing ... I've been here a long time so I know everything about this organization. It's a great organization."

Matt Read scored his second of the pre-season; currently he’s with the Leafs on a PTO and remains a longshot to make the opening day roster.

“I've been stressed out a little bit,” Read told reporters. “The unknown can get inside your brain a little bit."

Toronto will be back in action Saturday night at home to wrap up their pre-season schedule against the Red Wings.