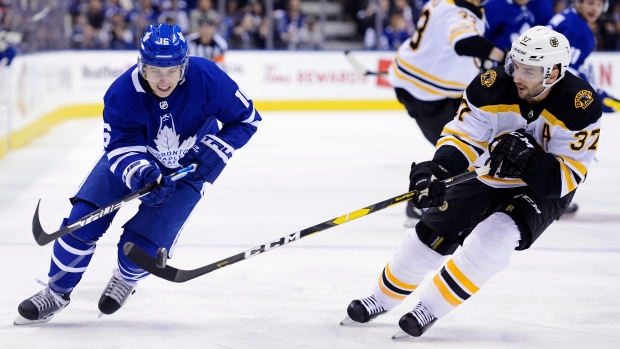 TORONTO – The Maple Leafs have had each of their last two seasons ended by the Boston Bruins through increasingly painful Game 7 eliminations in the first round of the Stanley Cup playoffs. But that’s all history now, and as a fresh season series between the clubs opens on Saturday, Toronto can’t afford to let its past derail the present.

“I think at playoff time there might be a little bit [of them in our heads],” said head coach Mike Babcock after the Leafs’ team meeting. “I think during the regular season, it's a regular season game. Not all games are [individually] perceived as equal, and some games you're more excited for than others. When you played them two years in a row in the playoffs, you know a lot about them, they know a lot about you. You want to see where you're at, they want the same. It's a good opportunity for us.”

The Leafs actually see the Bruins twice in the next three days, at home on Saturday and in Boston on Tuesday. For both of those games, Toronto will be without captain John Tavares, who’s nursing a broken finger suffered in Wednesday’s loss to Washington.

That leaves a major hole in the Leafs’ lineup, particularly when it comes to matching up against Boston’s vaunted top line of Patrice Bergeron, David Pastrnak and Brad Marchand. Through seven games this season, that trio has already generated 16 points at 5-on-5, while boasting 56 per cent possession.

Going toe-to-toe with them now for the Leafs will primarily be Auston Matthews’ unit with Andreas Johnsson and William Nylander, who have combined for 10 even-strength points and 62 per cent possession. But Babcock will be as strategic as possible in using his last change as Saturday’s game goes on.

“We spent a lot of time on this over the last couple of days,” Babcock said of preparing for the Bergeron line. “If you go through it in detail you find out Bergeron's line starts on o-zone faceoffs all the time [at 72.86 per cent]. So that would mean that I'm always starting my guys in d-zone, and that doesn't do me any good. So what they're trying to do is create advantage for those guys, we're going to try to do the same for Matthews.”

Being counted upon in that role won’t intimidate Johnsson, who feels a unique sense of familiarity with Boston. Since debuting with the Leafs late in the 2017-18 season, Johnsson has already skated against the Bruins in 13 playoff and four regular-season contests, giving him plenty of material to draw on for success.

“I've played them probably 20 times already,” Johnsson joked on Saturday. “It's small details [dealing with Bergeron]. If you think about it too much, you go crazy. But if you can shut down the first line you have won a lot. They are very skilled and fast and because they move the puck so quick they [hurt] a lot of teams. Every time you see them out, you have to be aware you can't make mistakes.”

While Johnsson is among the nine Leafs skaters projected to play Saturday who also suited up in last April’s Game 7 defeat, Tyson Barrie has a more detached view of taking on the Bruins. During the nine seasons he spent in Colorado prior to joining Toronto via trade in July, Barrie only saw Boston twice a year, and can treat this first meeting of the season like he would any other.

“It's no secret, they've got some great players over there and they can score,” Barrie said. “But the important thing for us is to play our game and try to get ourselves on track. You just can't give [the Bergeron line] anything easy. They can change a game quick so it's going to be important for our whole team, not just defenceman, to do a five-man job trying to slow them down and take away their time and space.”

That includes limiting any and all opportunities for Boston on the power play - while pouncing on their own extra man chances. The Bruins enter Saturday’s game with the second-best man advantage in the NHL (38.1 per cent), compared to the Leafs’ power play at eighth (26.9 per cent). With Tavares out, Nylander is moving into his bumper spot on the team’s top unit, a right-hand shot replacing a lefty. That little tweak represents just one more adjustment Toronto will have to integrate in order to take this first bout of the season from Boston.

“Ideally, we’d like a left shot there,” Babcock admitted of the bumper spot. “But we just felt that this is the best opportunity for [Nylander]. He played man-in-the-middle there at the World Championships [for Team Sweden last year]. That guy’s got to be there to break down all the pressure, you got to be dialed in, really competitive, heavy stick, so there's a challenge for him there.”

“Any time you lose a guy like Tavares, it's going to change some things,” added Barrie. “He's so good in that middle spot and he's got such a great shot but Willy is not a bad guy to be able to put in there also. [Our power plays] will be ready to go and it's a good challenge for us.”